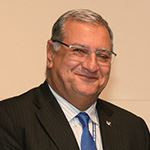 World Taekwondo Africa President Ahmed Fouly has promised "utmost effort" to ensure that the continent's qualification tournament for the Tokyo 2020 Olympic Games is a success.

The Egyptian, also a vice-president of World Taekwondo, was speaking before the event in Morocco's capital Rabat on February 22 and 23.

"I expect that the African qualifications will serve as an opportunity for the top elite African athletes to display their skills," he said, according to Daily Trust.

"Rest assured that World Taekwondo Africa and the Organising Committee will do its utmost effort to ensure the success of the Championships."

The deadline to register athletes for the qualifier is January 10.

"I hope that you and your honoured athletes will come to this event to display the highest spirit of taekwondo as an Olympic sport to be one of the African ambassadors to the Tokyo 2020 Games," said Moroccan Taekwondo Federation President Driss Halili.