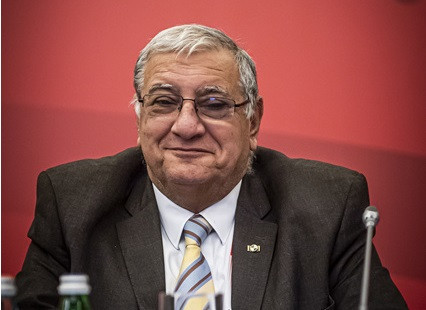 World Taekwondo has sent its well wishes to top African official Ahmed Fouly after he suffered a heart attack.

Fouly, the World Taekwondo Africa President, was transferred to intensive care in his home country of Egypt.

The 70-year-old is also vice-president of World Taekwondo.

Fouly's daughter shared the news of the heart attack in a Facebook post, with Nigerian newspaper Blueprint  reporting that he was taken to the Al-Aseel Hospital in the Egyptian city of Hurghada.

"World Taekwondo's thoughts are with President Fouly and his family," the governing body said in a statement.

"We are glad to hear he is recovering in hospital and we wish him a full and quick recovery."

Others have also shared well-wishes on social media.

"Our prayers are with you."

Fouly has been World Taekwondo Africa President since 2004.

He had led the Egyptian Taekwondo Federation since 2001 and was appointed to the World Taekwondo Council in the same year.

Fouly has overseen increasing success for African countries in taekwondo, with the continent earning five Olympic medals at Rio 2016.

Cheick Sallah Cissé of Ivory Coast was a standout performer, triumphing in the men's under-80 kilogram division.