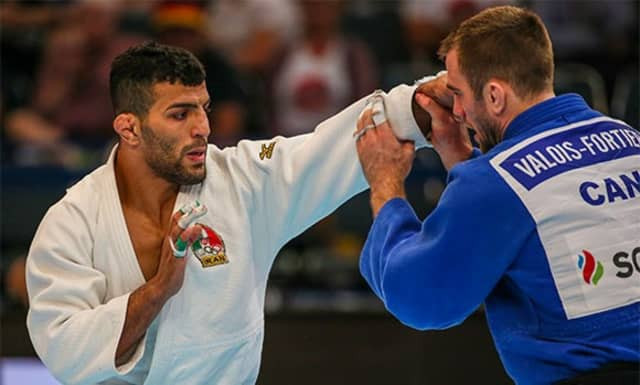 Iran’s mistreatment of athletes is set to come under the spotlight again when the country’s National Judo Federation launch an appeal at the Court of Arbitration for Sport (CAS) to try to overturn an international ban.

The Iran Judo Federation were suspended by the International Judo Federation (IJF) last October until they give guarantees that they will not boycott matches against Israeli opponents.

A protective suspension had been imposed on Iran following pressure applied to judoka Saeid Mollaei at the World Championships in Tokyo in August to avoid facing an Israeli athlete.

Iran has been warned the suspension will not be lifted "until the Iran Judo Federation gives strong guarantees and proves that they will respect the IJF Statutes and accept that their athletes fight against Israeli athletes".

Judo is one of Iran's strongest sports and, although they have never won an Olympic medal, they would expect to be strong contenders at next year’s re-arranged Games in Tokyo.

The IJF have claimed any measures taken against Iran would not apply directly to Tokyo 2020 because athletes are technically entered by their National Olympic Committees.

But, as reaching Tokyo 2020 depends almost exclusively on world ranking points earned in IJF events, it will be next to impossible for judoka from Iran to qualify.

Iran’s appeal against the decision to ban them, originally due to be held in April but postponed due to the COVID-19 pandemic, will finally be heard at CAS in Lausanne tomorrow.

Hearings will be conducted via a combination of in-person and video link.

The IJF’s main witness is expected to be 28-year-old Mollaei, whose treatment during the World Championships in the Japanese capital was the catalyst for the suspension.

The defending world champion potentially could have faced Israel's Sagi Muki in the men's under-81-kilograms event during the tournament.

But before his third-round fight against the Olympic champion, Russian Khasan Khalmurzaev, Mollaei alleged he was called by the Iranian First Deputy Minister of Sport, Davar Zani.

Zani reportedly ordered him to withdraw from the competition to avoid a potential contest between Iran and Israel.

Mollaei also claimed Zani made threats against him and his family.

Mollaei's claims of intimidation were backed up by Abdullo Muradov, the assistant of IJF competition manager Lisa Allen, who was seconded to help him after he appealed to the world governing body during the Championships.

Muradov, who speaks Farsi, confirmed that Mollaei "clearly confirmed that the athlete received a phone call, from 1st (sic) Deputy Minister of Sport of Iran and a video chat and a phone call from the Iran National Olympic Committee's President asking to the athlete not to fight in order to avoid a contest against the Israeli athlete".

Following the incident, Mollaei refused to return to Tehran and instead sought sanctuary in Germany, with the support of the IJF.

Mollaei has since been granted citizenship by Mongolia – whose President Khaltmaagiin Battulga is a former head of the country’s Judo Federation – to allow him to continue to compete internationally.

The Iran Judo Federation claimed that they had never ordered Mollaei not to fight against an Israeli opponent and his allegations were designed to help speed up a change of nationality.

National Olympic Committee of the Islamic Republic of Iran (NOCIR) President Reza Salehi Amiri has even publicly claimed that Mollaei had been taken “hostage” by IJF President Marius VIzer.

“Our athlete has been taken hostage by them. Vizer then sent Mollaei to Germany from Tokyo according to a prearranged plan,” Amiri told the media in Iran.

The NOCIR has even claimed that Mollaei “can go back to Iran without any problems and we welcome him with open arms”.

But, as insidethegames exclusively revealed earlier this month, Mollaei has been receiving renewed threats against himself and his family during the build-up to the CAS hearing.

Afkari was given two death sentences for allegedly stabbing a security guard to death and his involvement in demonstrations against the country's regime in 2018.

Afkari claimed he was tortured into making a false confession while human rights groups and activists believe he was unjustly targeted by the Iranian authorities to intimidate others who might choose to participate in peaceful protests.