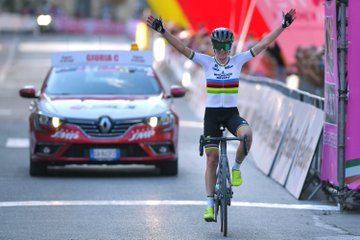 World champion Annemiek van Vleuten recovered from a mechanical to take the overall lead at the Giro Rosa with victory on the second stage of the race in Arcidosso.

The Mitchelton–Scott rider launched a solo attack and held off her competitors at the end of the 124.8 kilometres stage from Paganico.

The stage victory for the formidable Dutch rider saw her snatch the Maglia Rosa from Elisa Longo Borghini, who went top of the general classification standings following Trek-Segafredo's win in the team time trial yesterday.

"I went so deep because you never know what’s coming and you have to take every second, so I went from the bottom [of the Seggiano climb] to take as much time as possible because at this Giro we don’t have a big uphill finish so it can be a game of seconds in the end," said Van Vleuten.

"Every second can be useful.

"It was a time trial from the start of the gravel section.

"I wanted to hit it as the first rider, and I did, and then I went.

The 10-stage Giro Rosa is the only women's Grand Tour.