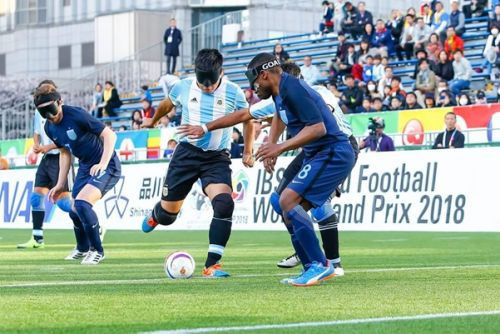 The International Blind Sports Federation (IBSA) Football Committee has announced that the Swedish capital Stockholm will host the nation's first international blind football competition in the form of the 2021 Euro Challenge Cup.

Scheduled to take place from June 16 to 20 next year, the tournament is a development event aimed at emerging countries and offers them a chance to take their first step into international blind football.

It is a key part of the UEFA-backed IBSA Blind Football Development Project Europe and will be hosted by Parasport Sweden.

Games will be complemented by referees' education sessions and shared technical training for players.

Sweden will also make its international debut at the tournament, with the country expected to field a mixed squad of men and women.

"For us this is a chance to take the next step together," Swedish player Maja Reichard said following the announcement.

"We can build a Swedish national team and help the sport of football five-a-side to grow in a fun and inspiring way."

Previous Euro Challenge Cups have been held in Prague in the Czech Republic in 2014, Thessaloniki in Greece in 2016 and Kraków in Poland in 2018.

"The Euro Challenge Cup 2021 in Sweden is the most important tournament for emerging countries in Europe to participate in," Ulrich Pfisterer, who chairs of the IBSA Football Committee, said.

"Many countries have used this opportunity as a stepping stone to consolidating blind football in their country.

"This is the very first time we are able to run such tournament in Scandinavia, thanks to our engaged, enthusiastic Swedish hosts.

"The IBSA Football Committee appreciates the continued support from UEFA to run the Euro Challenge Cup and deliver our development work in the continent.

"Thanks to UEFA and our IBSA Blind Football Development Project Europe, there are blind football programmes in 40 countries in Europe now and the game continues to grow."

The preliminary schedule for the 2021 Euro Challenge Cup will see the teams arrive on June 16 for referee education.

Joint training will take place on June 17, along with the first matches.

June 19 will witness the Swedish Midsummer Party and it is expected that the teams will depart on June 20.