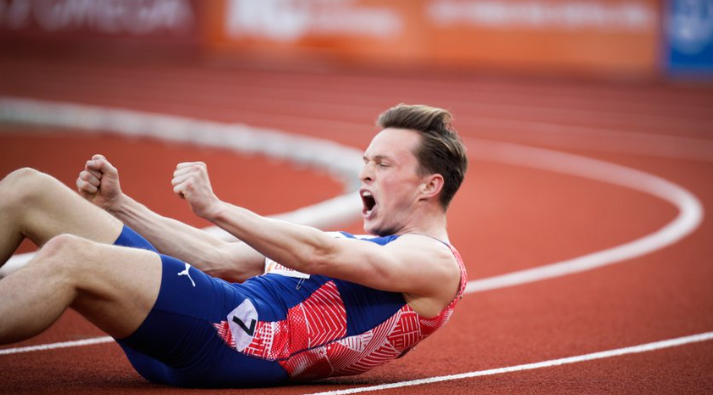 Karsten Warholm achieved his mission at the Impossible Games in Oslo tonight as, running alone in a largely empty stadium – but watched worldwide via a live TV link – he marked the sport’s first big break-out from coronavirus lockdown with a world best for the 300 metres hurdles of 33.78sec.

Another of Norway’s local heroes, 19-year-old Jakob Ingebrigtsen, set a European 2000m record of 4min 50.01sec in the event which matched Team Ingebrigsten – running on the Bislett Stadium – against Team Cheruyiot, running at the same time in Nairobi.

The 24-year-old Warholm, twice world champion over 400m hurdles, bettered the outdoor mark of 34.48 set in 2002 by Britain’s Chris Rawlinson.

Warholm already had a best of 34.26 for the rarely-run event, but that time was set indoors.

"I am used to competing against myself in training! It's better to do it alone than to not do it at all." @kwarholm on smashing the 300m hurdles world best at the #ImpossibleGames

"I am used to competing against myself in training!" he said.

"It's better to do it alone than to not do it at all."

His efforts were enthusiastically marked by the sparse groups of onlookers in and around the edges of the stadium – and by the socially-distanced dancers performing alongside cardboard cut-out figures.

They were also widely appreciated by athletics spectators desperate to watch high-level competition again despite the coronavirus lockdown.

This meeting was in lieu of the normally annual Bislett Games which has been a key part of the Diamond League programme, now sponsored by Wanda.

Today also saw details released regarding another Diamond League staple, the Herculis event in Monaco, which has been re-scheduled for August 14.

World pole vault record holder Mondo Duplantis, who had flown over from the United States to Stockholm and then driven for six hours to the Norwegian capital in order to compete on the night, ensured his efforts were not in vain as he won with a best of 5.86 metres on his third attempt.

That bettered the mark of 5.81 that his predecessor as world record holder, Renaud Lavillenie, had set in his own back garden back in Clermont-Ferrand earlier in the week – with his efforts being kept a secret before being replayed at the appropriate points in tonight’s competition.

The main programme is over, but the action continues at the #ImpossibleGames...

Duplantis, seeking to make the most of his lengthy outing, then had three unsuccessful attempts at the meeting record of 5.91m.

"Cheruiyot was our main competitor. It's not easy beating a world champion, but we did it!"

The split-screen showed pictures from the high altitude venue in Nairobi, which was lashed by wind and rain.

Sweden’s world discus champion Daniel Stahl was victorious in the stadium with a best effort of 65.92m.

Norway’s Therese Johaug, the multiple world champion and Olympic medallist in cross-country skiing, took 40sec off her 10,000m personal best with a time of 31min 40.67sec.

Johaug, who missed the 2018 Pyeongchang Winter Olympics after being suspended for 18 months for a doping offence, won the national 10,000m title in 32min 20.86sec in regular running shoes, and was wearing spikes as she sought to improve on what was the fifth-fastest time by a Norwegian woman.

Athletics' next big event is due to be the Inspiration Games on July 9 based in Zurich, which is to involve 30 athletes competing in eight disciplines across seven stadiums.