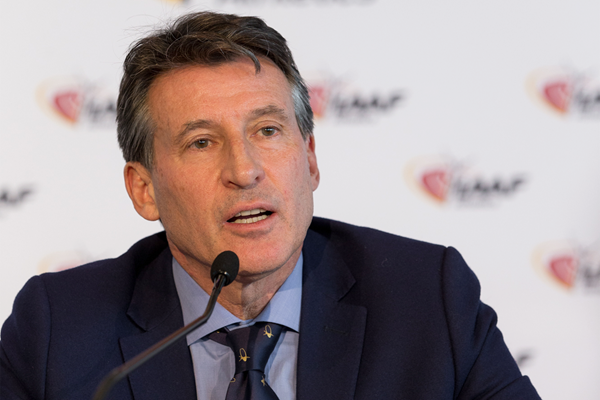 World Athletics President Sebastian Coe is set to become a member of the International Olympic Committee (IOC) after being proposed by the Executive Board.

IOC President Thomas Bach said Coe, in line to become the first World Athletics head to serve as an IOC member since disgraced predecessor Lamine Diack, had committed to addressing a conflict of interest which had previously prevented him from joining the organisation.

Bach said Coe had agreed to move from managing director of CSM Sport & Entertainment - a role which the IOC Ethics Commission said represented a conflict of interest - to a more "passive position" with the global agency.

"Because the Executive Board has full confidence in our friend Seb Coe they have decided to put the candidature forward subject to the delivery of such documentation," Bach said.

Coe, whose candidature is linked to his role as World Athletics President, is one of five officials due to be approved as members at the first virtual IOC Session on July 17.

The number of IOC members will grow to 105 when they are rubber-stamped by the Session next month.

"With the election of these five candidates, the IOC Session and the entire Olympic Movement would benefit from an extremely valuable range of skills and expertise," Bach said.

"We are also bringing up the female membership to 39."

Princess Reema, appointed Saudi Arabia's ambassador to the US last year, also serves on the Board of her country's National Olympic Committee.

She has been part of the IOC Women in Sport Commission since 2018 and is deputy of women's affairs at the Saudi General Sports Authority.

Grabar-Kitarović was President of Croatia from 2015 until she was defeated in her bid for re-election earlier this year.

The politician attended the 2018 FIFA World Cup final in Moscow and was part of the presentation party, alongside the likes of Russian President Vladimir Putin and FIFA head Gianni Infantino.

Ruenes, gold medallist in the women's javelin at the 1980 Olympics in the Russian capital, is chair of the COC Gender Commission and is part of the World Athletics Women's Committee.

A member of the Badminton World Federation Council, Batbold is due to serve as Mongolia's Chef de Mission at the postponed Tokyo 2020 Olympic Games.

The IOC Executive Board has also extended the term of China's Zaiqing Yu, an IOC vice-president, until 2025.

The Session will also be asked to green light a change in William Blick's status on the IOC from a member linked to his function as President of the Uganda Olympic Committee to individual member, which will allow him to remain on the body until he turns 70.