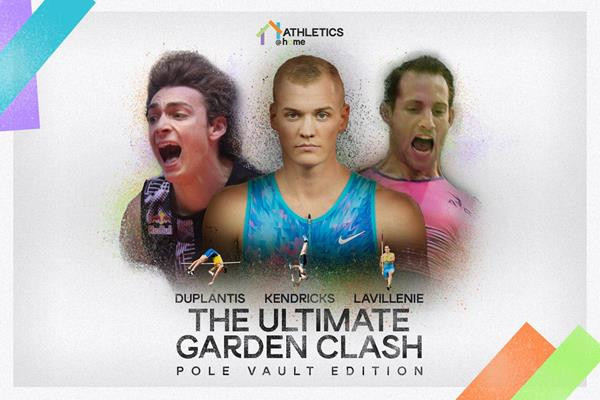 The Ultimate Garden Clash - Pole Vault Edition, featuring three of the top four vaulters in the world, is due to take place tomorrow, weather permitting.

It will pit Duplantis, who broke the world pole vault record twice within the space of a week in February, against France's Lavillenie - who held the record before the American-born Swede - and American Kendricks, winner of the world title in 2017 and 2019.

The three athletes will be connected via a live video link and the event is set to be streamed on the World Athletics YouTube, Twitter and Facebook pages.

Duplantis will take part from his base in Lafayette in Louisiana, while Lavillenie and Kendricks are set to participate from their gardens at their homes in Clermont-Ferrand and Oxford in Mississippi, respectively.

The competition is designed to help fill the void of live sporting action caused by the COVID-19 pandemic.

Instead of a contest to clear the maximum height, they will instead attempt to vault 5.00 metres as many times as they can within 30 minutes.

"I'm ecstatic to be able to compete again, especially against Sam and Renaud," Duplantis said.

"Since it's unknown what other competitions we will all have together, we definitely are going to enjoy this and have a good time with it.

"Also, winning this is crucial because I don't like losing to them very much."