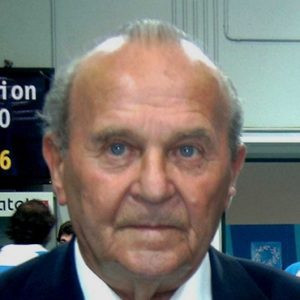 The world of weightlifting has paid tribute to Gottfried Schodl, a man who led the sport through three decades of transformation, following his death at the age of 95.

Schödl, who died in his home city of Vienna, led weightlifting through a period of unprecedented change during the last three decades of the twentieth century.

The sport will be unable to appropriately mark the passing of one of its most respected and influential figures because of restrictions of movement during the coronavirus pandemic.

If the current restrictions were not in place, many people from Europe and beyond would surely have attended the funeral of a man known as ‘Mr Weightlifting’.

Tamás Aján, the Hungarian who resigned as IWF President yesterday, worked alongside Schödl for many years and is the only other man, since 1972, to have led the sport’s governing body.

When Schödl, a popular and respected Austrian, took charge weightlifting was for men only, featured three lifts rather than two, and was utterly dominated by Europe.

Even the name of the governing body was different.

One of the first significant changes adopted by Schödl was the scrapping of its previous title, Federation Halterophile Internationale, in favour of the International Weightlifting Federation (IWF)

The change was made during the Munich Olympic Games in 1972, which were the last to feature the now defunct clean and press.

Schödl, described as “an absolute gentleman” by many who served the sport under his leadership, had been elected only the day before the Games began.

By the time of his departure from the IWF 28 years later, a couple of months after the Sydney 2000 Olympic Games, weightlifting was totally transformed.

Two politically-motivated Olympic boycotts had preceded the break-up of the Soviet Union, and Asia, which had taken only two of 27 Olympic medals compared to Europe’s 25 back in 1972, was now the dominant force.

Most significant of all, women had been welcomed into weightlifting and they competed in the Sydney Games, an Olympic first.

Sadly, though, not for the first time nor the last, the sport’s image had suffered badly because of doping before and during the Games.

One of Schödl’s last acts as IWF President, an attempt to enforce a ban against the entire Bulgaria team during the Sydney Games, was foiled by the Court of Arbitration for Sport (CAS).

Romania had already been barred, then allowed back in after its National Olympic Committee paid a fine, because of out-of-competition doping violations.

The IWF wanted to throw out Bulgaria and disqualify all its athletes after three Bulgarians tested positive during the Olympic Games, but an ad hoc CAS hearing allowed an appeal by a Bulgarian who had not tested positive, Alan Tsagaev.

Tsagaev then won a silver medal in the 105kg class, leaving Schödl to say, “If this is the future of world sport, then I’m sorry.”

He told a German newspaper, two weeks after the Sydney Games ended, that he had endured “the worst days of my term.”

Murray Levin, the American who sat on the IWF Board and led the Pan American Weightlifting Federation for many years, said, “Gottfried Schödl was a good friend of mine and I always found him strict on drugs.

“He would advocate throwing them out rather than levying fines.”

Schödl, born on July 28, 1924 in Vienna, started in weightlifting as a teenager at the local Meidlinger club.

His military service was distinguished, as he rose to become commander of a tank company on the Eastern Front.

Today, we lost Mr Gottfried Schödl, who served as IWF President from 1972 to 2000.
We send our sincere condolences to his family and remain thankful for his many, lasting contributions to the IWF.❤️#IWF #Weightlifting https://t.co/zngvUGMHqy

Schödl was a prolific author, a diligent keeper of records, a journalist who founded the newspaper The Weightlifter, a lecturer, a national coach, and a highly respected referee.

He first joined the Board of weightlifting’s governing body in 1964 – when it was the Federation Internationale Halterophile et Culturiste.

He was given the Olympic Order by the IOC in 1993, and garnered a host of awards from all around the world.

Schödl, who was married three times, had two sons, Gottfried and Herbert, and his grandson Martin was president of the Austrian Weightlifting Federation earlier this century.

Some of those who worked with Schödl recounted their memories of him to insidethegames.

"Doping was his greatest enemy. On the many occasions we used to meet at different Championships and international events, he would complain bitterly as to how the doping was ruining our sport.

"I remember one occasion in Poland during the World Junior Championships in 1995 – I had just shifted one year earlier to Nauru - and I took across four young Nauruan lifters.

"It was the first time that a group of Nauruans would compete internationally.

"One morning at breakfast, the young kids were sitting with me at a table and Gottfried walked in.

"He hugged me and then he looked at the young lifters and he said, 'These young kids brings to the sport a breath of fresh air'.

"He was referring of course to young kids being clean from doping."

Philippe Saint-Cyr, a renowned Canadian weightlifting official who is honorary vice-president of IWF said of Schodl: "Among his qualities I can mention the knowledge of our sport and a great sense of leadership.

"A very good communicator and a good motivator with good judgement, he showed the direction in which weightlifting would develop under his mandates.

"For many years he accumulated and published statistics on athletes, World and Olympic records and referees’ activities.

"My friend Gottfried was a real gentleman and generous person and I shall miss him."

Australian Sam Coffa, President of the country's weightlifting federation and former vice-president of IWF and head of Technical Committee said: "Gottfried was the doyen of technical officialdom: he took me under his wing and I learnt so much from him.

"A true antagonist of doping, he suffered so much when told of more adverse analytical findings and used to confide in me his personal feelings.

"He was a gentleman who commanded the respect of all, and a man of the people with a great sense of humour.

"At the Seoul Olympic Games in 1988 I was sitting on his right at the jury table.

"In the middle of the table was an exquisite small silk Olympic flag which he took a liking to, but I made it disappear.

"When the Games started, three gold medallists from Bulgaria returned positive findings and the Bulgarian Federation withdrew the full team.

"Gottfried was distraught and his feelings were compounded by the fact that the little Olympic flag had disappeared.

"He said to me: 'Sam, not only do we have doping cheats we also have thieves among our people'. Naturally I said nothing.

"Years later in Canberra, Australia we conducted the World Super Heavyweight Championships and I took with me the little flag.

"At the closing banquet I made a speech and related the story to the public, and there and then I put the flag on the table.

"You should have seen his face while he exclaimed: 'You were the thief!'

"He was a truly remarkable human being."