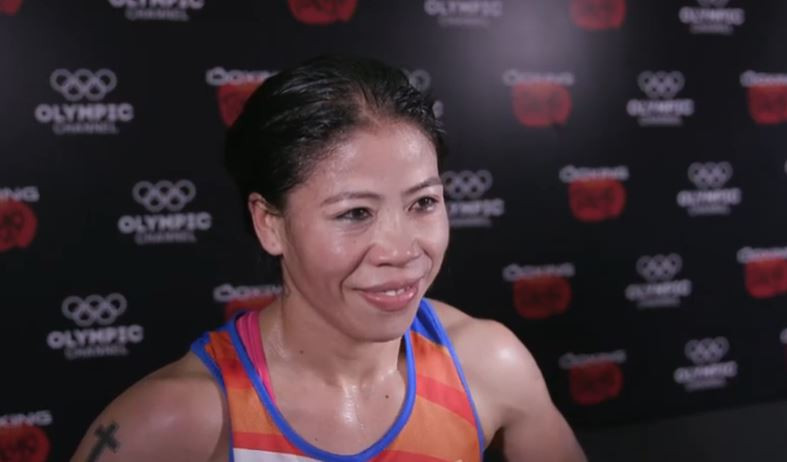 Later in the day Mary Kom, India's six-time world champion and London 2012 bronze medallist, reached the quarter-finals of the women’s 51kg flyweight competition and is now one win away from claiming the Tokyo 2020 place available to semi-finalists across all weights.

Panghal, the top seed, weathered a battering in his final round against Mongolia’s Enkhmandakh Kharkuu in the morning session to edge a split decision.

He will next meet Carlo Paalam, who beat Afghanistan’s Ramish Rahmani, on Monday morning, with the winner claiming the Tokyo 2020 Olympic place on offer to all semi-finalists across the weight classes.

“I have fought him twice before and it was one win each, so we knew how he boxed and stuck to the plan we made,” Panghal told the Jordan Olympic Committee.

China’s 2016 Olympic bronze medallist at 52kg, Jianguan Hu, won on the referee’s verdict after a clash of heads brought his fight with Chinese Taipei’s Po-Wei Tu to an early end in the third round due to a cut over the latter’s left eye.

Hu will fight world bronze medallist Saken Bibossinov in the last eight after the Kazakh south-paw beat Azat Usenaliev, of Kyrgyzstan, with a unanimous judges’ decision.

There was a tough passage through too for featherweight 57kg top seed Mirazizbek Mirzakhalilov, of Uzbekistan, who worked hard for his split decision win against India’s Gaurav Solanki.

His next opponent will be Sing Yu Tso, of Hong Kong, who survived a late barrage from Tajikistan’s Bakhtovar Sagizov to win a split decision.

World number 14 and tournament fourth seed, Jamie Chang, of Papua New Guinea, was stopped in the second round by confident Iranian teenager, Daniyal Shahbakhsh, 19, who could be one of the tournament’s surprise packages.

His quarter-final opponent will be Kazakhstan’s former Asian youth champion, Serik Temirzhanov, who dominated his fight with Iraq’s Jaafar Al-Subani.

Elsewhere, world champion and women’s 51kg top seed Hsiao-Wen Huang cruised through to the quarter-finals with a win over world bronze medallist Kirsty Harris of Australia.

Both boxers have dropped down in weight in their bids to reach Tokyo this summer, but it was the Chinese Taipei fighter who came through with a unanimous decision.

Kom, 37, who boxed at the first ever women's World Championships in 2001, earned a unanimous decision over New Zealand’s Tasmyn Benny and will now face Irish Magno of the Philippines, a winner over Winnie Yin Yin Au of Hong Kong.

Mary Kom (@MangteC) just won her last round today making her only one win away from qualifying for #Tokyo2020 !

Another unanimous decision saw Australia’s Alex Winwood past Chun Hin Kanneth Tam of Hong Kong and into a do-or-die quarter-final against 19-year-old Thai prospect Thitisan Panmot, who had put paid to 52kg third seed Inkyu Kim of South Korea on a split decision.

In the evening’s men’s 57kg featherweight bouts, Thailand’s double Olympian Chatchai-Decha Butdee won a unanimous decision over Ian Clark Bautista from the Philippines and 18-year-old Australian Charlie Senior was stopped in the second round by Van Duong Nguyen of Vietnam.

Home boxer Mohammad Alwadi was cheered to a victory by unanimous decision over Lucky Hari of Indonesia in the penultimate bout of the day.

The session ended with an upset as Sangmyeong Ham of South Korea beat Tsendbaatar Erdenebat of Mongolia, the second seed, reigning World Championships bronze medallist and Rio 2016 Olympian on a split decision.