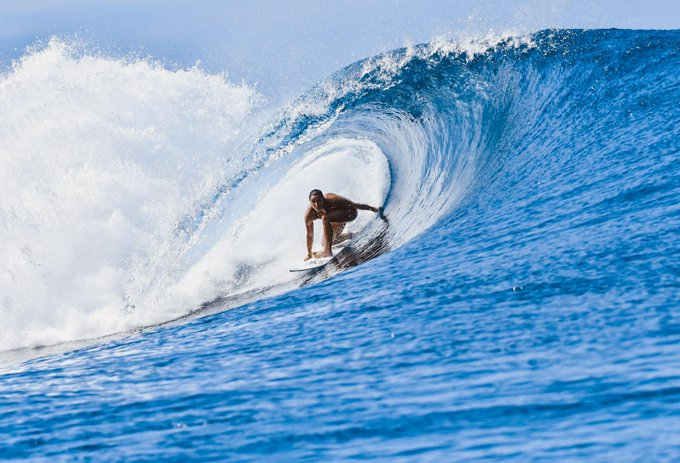 Tahiti has been approved as the location of surfing at the Paris 2024 Olympic Games by the International Olympic Committee (IOC) Executive Board.

Approval was also given by the IOC Executive Board for Place de la Concorde hosting urban sport events at the Olympic Games.

Tahiti - the largest island in French Polynesia, an overseas collectivity of France - was selected by the Paris 2024 Executive Board in December as the preferred venue.

Tahiti is located 15,700 kilometres from Paris, which would make it the furthest distance between two Olympic competitions being held as part of the same Games in the history of the event.

One more step! IOC approves both Teahupo'o in Tahiti for surfing and Concorde for urban sports for #Paris2024 Games. Two iconic sites to give athletes and spectators spectacular competitions. pic.twitter.com/XFAMJF7E99

IOC President Thomas Bach had appeared to cast doubt on the possibility of surfing at Paris 2024 taking place in Tahiti last year, when he claimed the organisation preferred a venue "closest to the centre of the Games".

However, approval was granted by the IOC Executive Board at its meeting here today.

The decision effectively confirms the competition will be held on the Teahupo’o wave, which is world renowned for its conditions and surf.

Surfing was one of four additional sports chosen by Paris 2024 for the Games, along with breaking, skateboarding and sport climbing.

The four sports are provisionally included on the programme, with full confirmation expected in December 2020.

Temporary modular houses would form the Athletes' Village for surfers competing in Tahiti.

Paris 2024 claims that from an economic, social and environmental perspective the organisation will be working closely with stakeholders and Polynesian authorities over the next four years to promote the local community’s know-how and products.

They would also participate in the Closing Ceremony.

“We are delighted that the IOC Executive Board has approved the Teahupo’o site in Tahiti for the organisation of the surfing competitions and Place de la Concorde for the urban sports events," Estanguet said.

"This marks another milestone with our ambition to deliver spectacular and sustainable Games that will offer a unique experience for athletes.

"The organisation of the surfing events at Teahupo’o is also an opportunity to bring to life a new model for delivering Games that are aligned with the IOC’s New Norm, where the event adapts to the site, while integrating a strong environmental ambition.

"I would like to take this opportunity to once again thank the IOC Executive Board and its President, Thomas Bach.

"Our relationship built around confidence and trust enables us to introduce strong innovations, as illustrated by these choices”.

Place de la Concorde, the square at the heart of Paris linking the Champs-Elysées to the Tuileries Gardens, will host urban sports at the Games.

Paris 2024 says the square will become a spectacular city-centre arena for the Games, showcasing Paris’ heritage and offering exceptional images for viewers and spectators.

The sports based at the venue are yet to be confirmed, with Paris 2024 stating it is working with the International Federations concerned, the IOC and Olympic Broadcasting Services to examine the various options relating to the Place de la Concorde site.

This review process is guided by the ambition to offer optimum conditions for competitors, Paris 2024 claims.