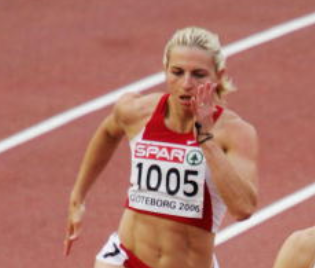 Albanian sprinter Klodiana Shala has been found guilty of committing an anti-doping offence at London 2012 by the International Olympic Committee (IOC).

The now 40-year-old failed a drugs test for banned steroid stanozolol after the retesting of samples from the Games eight years ago.

She was due to compete in the 200 metres but did not race after withdrawing injured.

However, she was still subject to the anti-doping rules covering the Games.

The IOC has not issued a sanction but has requested that World Athletics consider further action.

It had already been announced earlier this month that Shala had been provisionally suspended by the Athletics Integrity Unit.

In the Greek capital, she carried her country's flag at the Opening Ceremony.

Samples from previous Olympics are being re-analysed by the IOC using the latest technology, in a bid to retrospectively catch cheats.

The IOC has delegated the selection of samples being re-tested to the International Testing Agency, which brings forward cases.

An athlete then has the right to be heard at either the Court of Arbitration for Sport or in front of an IOC Disciplinary Commission, but documents say that Shala did not provide any response during the investigation.

Her right to request her B-sample and a copy of the laboratory documentation package was also considered waived.

The IOC Disciplinary Commission, chaired by Denis Oswald, ruled that Shala was "found to have committed an anti-doping rule violation".

Full implementation of their decision must be ensured by the National Olympic Committee of Albania.

Reanalysis of London 2012 samples will continue until August, when the statute of limitations period is reached.