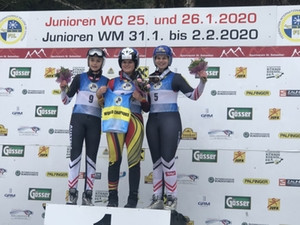 Daniel Gruber of Italy was 0.71 seconds behind him, while compatriot Fabian Brunner was 1.51 seconds off the leader to complete the podium.

It was a family affair in the doubles contest, with cousins Fabian Achenrainer and Simon Achenrainer triumphing in 2:32.72.

There was more success for Austria as brothers Maximilian Pichler and Matthias Pichler finished 0.53 seconds behind them to claim silver, while Bine Mekina and Blaz Mekina of Slovenia were 3.94 seconds off the mark to take bronze.

Vanessa Markt claimed yet another medal for Austria, coming third after finishing 0.51 seconds off the victorious time.