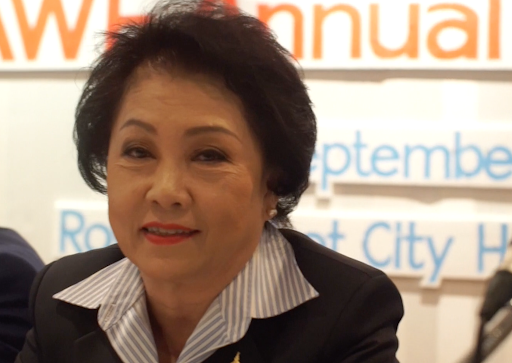 Thai Amateur Weightlifting Association (TAWA) President Boossaba Yodbangtoey has announced her resignation, as well as that of the entire TAWA Executive Board, in the wake of the German television documentary that produced damning evidence about doping in the country.

German state broadcaster ARD aired the documentary Secret Doping – the Lord of the Lifters earlier this month, during which undercover reporters secretly recorded comments by Thailand's London 2012 Olympic bronze medallist Siripuch Gulnoi, who admitted she had doped as a teenager when she had "a jaw like a man and a moustache".

Gulnoi alleged girls would start doping at 13 for national competitions, that those responsible did not care about the effects on girls’ health, and that doping was an established feature of weightlifting in Thailand, where it has produced more gold medals than any other sport.

In light of the documentary, Yodbangtoey, the wife of the International Weightlifting Federation's (IWF) first vice-president Intarat Yodbangtoey, has announced she and the rest of the TAWA Executive Board have resigned as of today, stating Thailand's reputation and image has been "destroyed" dramatically.

"Code of ethics as well as good governance in sport are principles upheld as usual by the TAWA Executive Board," she writes.

"What matters most is how to protect this national sport within our beloved country - Thailand.

"Therefore, members of the TAWA Executive Board all agree, with full accountability, to resign effective from January 30, 2020."

The International Olympic Committee has already set up a Disciplinary Commission to "follow up on the doping confession" by Gulnoi.

Thailand is currently suspended for multiple doping offences and it faces further sanctions after the IWF stated in the immediate aftermath of the documentary's airing that cases against 10 lifters from the nation had been closed, resulting in 17 doping violations between them.

The world governing body also announced that it had taken up Gulnoi’s comments with TAWA, and said: "The widespread abuse of the same anabolic agent, especially among juniors, in Thailand would appear to be indicative of an organised system of doping…

"The IWF will now confer with WADA (World Anti-Doping Agency) and the International Testing Agency (which now handles the IWF’s anti-doping procedures), in order to establish whether a wider investigation may be appropriate."

A statement from WADA acknowledged it was aware of allegations in the ARD programme, which alleged financial malpractice, doping cover-ups and sample manipulations, and would "continue to pursue its enquiries regarding potential breaches of the World Anti-Doping Code".

As for the specific allegations regarding doping of weightlifters in Thailand, WADA said it will "follow up with the IWF, the Doping Control Agency of Thailand and other stakeholders to gain a clearer picture of the situation".

"WADA will take any action that may be warranted if breaches of the Code by individuals or Anti-Doping Organisations are established," the statement added.

IWF President Tamás Aján was the main target of the investigation by ARD.

Last week, the Hungarian stood aside from his role for 90 days, pending investigations into allegations of corruption.

Ursula Papandrea, the American who chairs the IWF Women's Commission and is President of USA Weightlifting, was voted in as Acting President at a meeting in Doha.

Aján has been at the IWF since 1976, serving 24 years as general secretary and the past 20 as President.

His fifth term as President was due to run until May next year, and at the age of 81 he said he would not stand again.

insidethegames exclusively reported yesterday that a number of members of the IWF Executive Board may call for Aján to be suspended indefinitely.

Russian Board member Maxim Agapitov claimed Aján had made "an act of defiance" in writing to all Member Federations of the IWF five days after Papandrea took charge.

By writing the letter, signing himself as President, and inviting National Federations to send participants to an event that falls within the 90-day "stand-down", Aján was "disregarding completely that he has been requested to stand aside for 90 days whilst he is being investigated", said Agapitov.