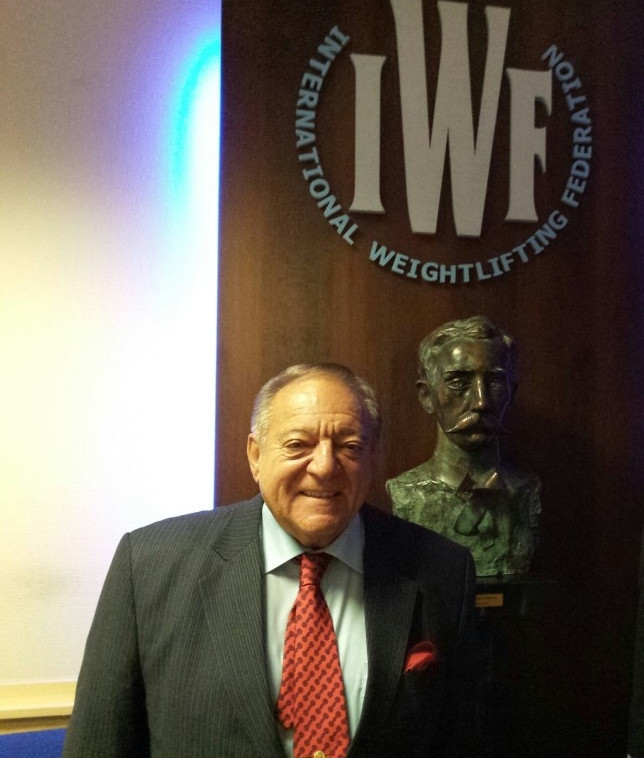 Tamás Aján has told an interviewer in Hungary that the German television documentary about alleged corruption in weightlifting has "completely ruined my life and 50 years of my work".

Aján, the Hungarian who was general secretary of the International Weightlifting Federation (IWF) for 24 years before becoming President in 2000, was the main target of the documentary Secret Doping - The Lord of the Lifters.

It was broadcast last Sunday (January 5) by ARD, the German state broadcaster which was first to reveal systematic doping in Russian sport and which has been at the forefront of doping revelations for many years.

The programme alleged that millions of dollars paid to the IWF by the International Olympic Committee (IOC) had "gone missing", claimed there was corruption in doping procedures, and secretly recorded a conversation with an Olympic medallist who alleged girls as young as 13 were taking steroids in Thailand, the nation with the worst recent record of doping in the sport.

The IWF, the Thai Amateur Weightlifting Association, Hungary's national anti-doping agency (HUNADO) and the Moldovan Weightlifting Federation all issued strong denials of allegations against them.

The Moldova Federation statement accepted that three of its athletes had used "doppelgangers" to provide urine samples in 2014, but said they acted "without any member of our Federation being aware of it" and that nobody from the Federation had ever "corrupted or tried to corrupt doping control officers".

Aján, 80, told the MTI news agency in Hungary that accusations of corruption by ARD were "slanderous" and "unjust".

"The IWF reserves the right to take legal action against anyone who spreads lies or slander," Aján said.

"ARD says weightlifting is a sport where millions go missing - it's just not true."

"I was not surprised that Baumgartner and Urso gave their name to this campaign," Aján told the Hungarian tabloid Blikk.

"Desperate people are attacking me, who are trying to warm up a case that has been officially closed for 10 years, trying to hurt me."

Baumgartner, who lost his IWF Executive Board seat at the 2017 elections, when Urso failed to unseat Aján as President, told ARD: "Aján stands for a system that, over a period of decades, has established doping in weightlifting and that has gone wrong for decades."

In his interview with MTI, Aján said: "It should be stressed that, yes, there are two bank accounts, but neither is secret.

"All members of the [IWF Executive] Board were aware of it, I am joint signatory along with the head secretary-treasurer, while three other Board members have signatory rights at the bank.

"This film has completely ruined my life and 50 years of my work.

"A large part of my work has been about doping prevention.

"That's why it was a blow to the gut for them to claim we had done nothing.

"Even [International Olympic Committee {IOC} President] Thomas Bach said what great anti-doping work is being done by the IWF."

Last year, the IOC - which described the ARD accusations as "very serious and worrying" - confirmed weightlifting's status on the Olympic Games schedule after the IWF revamped its anti-doping procedures and introduced more rigorous testing into the Olympic qualifying system.

Aján, who confirmed that he would not stand again for election when his fifth term comes to an end in 2021, said ARD's claim that weightlifting had been overseen by one man for nearly 50 years was "simply nonsensical."

He promised there would be an extraordinary meeting of the IWF Executive Board, at which the programme and its aftermath will be discussed.

Aján countered accusations of corruption against doping control officers from HUNADO, and said the IWF worked with the Agency for three reasons: HUNADO is a well-organised company, has highly skilled inspectors who speak several languages, and they offered a discount because of the large number of inspections.

Doping control accounts for a large part of the IWF expenditure.

The World Anti-Doping Agency admitted it was aware of the allegations in the documentary and its independent investigations department would look into potential breaches of the anti-doping code.

Global Athlete, the athletes' representative body, called on the IWF, IOC and WADA to "address these allegations in timely, independent, robust and most importantly in a transparent manner".

A statement by Global Athlete said, "Weightlifting as an Olympic sport has a bright future.

"That future must see leadership committed to equal and meaningful athlete engagement to strengthen the sport.

"The athletes will be the ones most affected if the sport is not enhanced.

"We encourage all weightlifting athletes to come forward to be a part of the solution by either reaching to out to your fellow athletes and athletes' commissions, Global Athlete or to WADA and other trusted whistleblower lines.

"That is why we will continually advocate for equal and collective athlete representation.

"Athletes want to be a part of the solution to grow sport."