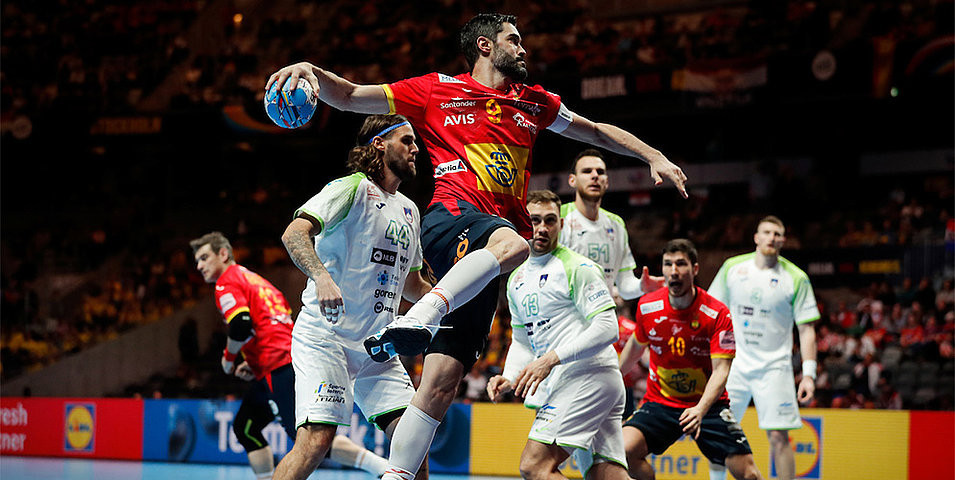 Holders Spain held off a late charge from Slovenia to book their place in the European Men's Handball Championship final, where they are set to face Croatia following their thrilling win over Norway.

Thanks to an efficient performance, their strong defence and the last three goals from Alex Dujshebaev, Spain ended Slovenia’s hopes with a 34-32 victory at Tele2 Arena in Sweden's capital Stockholm.

The defending champions will play in their sixth final in the continental event and their third in a row, after claiming the silver medal in 2016 and gold in 2018.

They could also become the first team since Sweden in 2002 to retain the title.

Slovenian Jure Dolenec was the match's top scorer with seven goals, while Ángel Fernández Pérez, Dujshebaev and player of the match Raúl Entrerríos each scored six times for Spain.

Earlier today, Croatia beat Norway 29-28 in extra time after Željko Musa scored only his third goal of the tournament in the closing seconds.

After working hard to find answers for Croatia’s defence through the first period, Norway fought back for a thrilling end to the match, with the score standing at 23-23 as the full-time buzzer sounded.

It was not until four seconds before the end of the second extra time period that Musa, primarily a defensive specialist, pulled Croatia in front.

Croatia's win ends their 10-year wait to reach the final of the event, having last contested it in 2010 when they lost to France.

Their only other appearance in the final came two years earlier, when they suffered defeat at the hands of Denmark.

With eight goals and a key role in defence for the winners, Domagoj Duvnjak earned the player of the match award.

Norway’s Sander Sagosen scored 10 goals to bring his overall tally to 61, equalling Macedonia's Kiril Lazarov’s record for the most scored in a single edition of the event.

Both Croatia and Spain arrive in the final unbeaten after seven victories each and one draw when they met each other in Group I on Wednesday (January 22).

Slovenia will play Norway in the bronze-medal match due to take place tomorrow.

That will be preceded by the fifth-place play-off between Germany and Portugal.

The final is scheduled for Sunday (January 26).