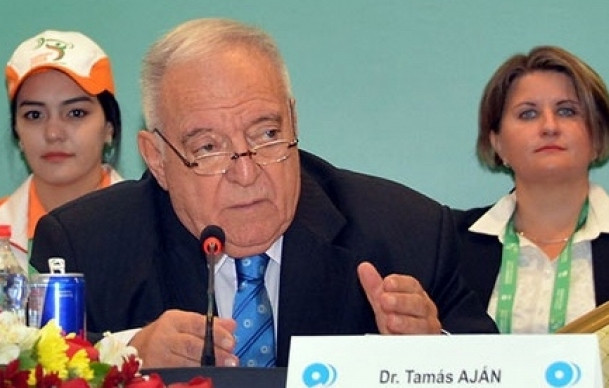 A German television documentary broadcast today alleges corruption and cover-ups in weightlifting, in doping and finance, and secretly records a conversation with an Olympic medallist who claims girls as young as 13 are doping in Thailand.

Questionable practices by the Hungarian National Anti-Doping Agency (HUNADO), favoured for years by the IWF, are exposed, and a team doctor from Moldova alleges in a secretly recorded conversation that "clean" tests can be bought for $60 (£45/€55) at national level and $200 (£150/€180) from international testers.

Tamás Aján, the Hungarian who has been at the helm of the IWF since the 1970s, is the main target of the investigation by ARD, the German state broadcaster that revealed systematic doping in Russia in a 2014 documentary and which has been at the forefront of doping revelations for many years.

Aján, 80, was general secretary of the IWF from 1976 until 2000 and has been President throughout this century.

For decades weightlifting has been beset by doping, a problem that became so bad in the past decade that the IOC threatened to withdraw its Olympic status.

After an overhaul of its anti-doping programme - which is now in the hands of the International Testing Agency - and the introduction of a new Olympic qualifying system that compels lifters to be tested rigorously, weightlifting has been told its future is safe.

But the revelations in the ARD programme seem sure to be of concern to the IOC, which is monitoring the IWF's progress.

The Spanish Olympic gold medallist Lidia Valentín, twice named IWF female weightlifter of the year, is among those who speak out against the alleged corruption, as are two German members of the IWF's Clean Sport Commission.

Mark Pieth, a Swiss professor of criminal law who worked on reforms at FIFA after their corruption scandal, said after a lengthy review of ARD's findings: "What I have seen here seems very, very brazen to me.

"More brazen than what I saw at FIFA."

The IWF is registered ­in Switzerland and, said Pieth, prosecutors would be duty bound to investigate once they became aware of the evidence presented in the documentary.

Both men were losers in the 2017 IWF elections in Thailand, where 80-year-old Aján was elected President for a fifth term, beating Urso.

Baumgartner, who sits on the IWF's Clean Sport Commission, lost his place on the governing body's Executive Board.

For years, Urso alleged, some of the money paid to the IWF by the IOC ended up in two Swiss bank accounts, the assets of which did not appear on the balance sheet.

He told ARD that only one person held the signature for these accounts: Tamás Aján.

In an audio recording of a meeting in 2009, Aján claims that the money is intended as an emergency reserve for the IWF.

He said he did not know, 10 years later, where the money had gone and when asked why no criminal proceedings had been brought, he replied: "Good question, it's just not the done thing in sport to pursue criminal charges for such things.

Urso said he wrote to the IOC to complain but was told it was "an internal problem".

"This is unacceptable," said Urso.

"This is like saying, 'I don't want to have any responsibility, what the IF (International Federation) do, is OK for me.

"This is anarchy, not democracy."

The ARD investigators also highlighted the apparent manipulation of athletes' samples when they secretly recorded a conversation with Dorin Balmus, a doctor with the Moldova weightlifting team.

Balmus said when Moldovan lifters were tested by HUNADO, "doppelgangers" would give urine samples in place of athletes due to be tested, and payments would be made to the testers to persuade them not to look too closely at passports.

Urso complained nearly 10 years ago about the IWF's persistent use of HUNADO as testers, with the Hungarian agency carrying out 77 per cent of the tests reviewed by the ARD team.

HUNADO's efforts came under suspicion in 2015, when the United States hosted the IWF World Championships in Houston.

The United States Anti-Doping Agency (USADA) stepped in to oversee testing, despite protests from Aján, said the documentary makers.

USADA had "on-the-ground intelligence" and found syringes in athletes' rooms, before returning record numbers of positives.

Azerbaijan had six of its team positive, Russia four, and the final tally was 26 athletes disqualified for doping.

"We weren't going to just test for show," Travis Tygart, the chief executive of USADA, told the programme.

The number of positives in Houston was a mystery to Hans Geyer, another member of the IWF Clean Sport Commission who works at the World Anti-Doping Agency-accredited laboratory in Cologne, which carries out tests for the IWF.

Geyer said he found the Houston results "inexplicable" because samples from some of those who tested positive had only recently been passed as "clean" by the Cologne laboratory.

Investigations revealed "several manipulations", said Geyer, whose team used biological passports and DNA analysis to determine that some urine samples had come from "other sources".

According to the ARD investigation, Moldova, which had three athletes test positive in Houston, was among the nations with manipulated samples - taken by Hungarian testers.

"How can an officer fail to notice that urine has been swapped?" Geyer told ARD.

"It is still a mystery to us, and perhaps they themselves are involved."

The ARD team studied 16,000 doping tests in a 10-year period up to 2018, and revealed that of 450 world and Olympic medallists in that time, nearly half had not undergone a single out-of-competition test in the year they stood on the podium.

When investigators announced the testing figures to Valentín at a recent competition in Germany, she said she could not believe what she was hearing, and it was "scandalous information".

"There were no tests because they knew they would be positive," she said.

Another Olympian, Jurgen Spiess of Germany, claimed it was virtually impossible to win a medal because so many rivals were doping.

"Sometimes…after a competition we cannot believe how casually and naturally some athletes from these countries with doping issues talk openly about doping," he told ARD.

"Because to them it is just as natural as to us that we do not dope."

He blames the officials who run weightlifting and said: "You're essentially at the mercy of the whole system.

"I'm lifting against the system of the country in question."

There were further revelations regarding the Azerbaijan team in 2013.

Despite 18 athletes testing positive, 12 of them continued competing for months, at IWF Youth and Senior World Championships, at Continental Championships, the Summer Universiade and an IWF Grand Prix in Baku, the Azerbaijan capital.

When they were finally suspended much later, their retrospective results were scrapped.

A secretly recorded conversation with Siripuch Gulnoi, promoted to Olympic bronze in 2012 because of a doping disqualification, laid bare the extent of doping in Thailand, which is currently suspended from weightlifting because of multiple violations.

Gulnoi, whose name was Rattikan in 2012, admitted she had "a jaw like a man and a moustache" when she was doping as a teenager, but "those responsible couldn't care less about health".

She alleged doping was part of weightlifting in Thailand, and that some girls started doping at the age of 13 for national competitions.

Most of the drugs came from other countries, Gulnoi told undercover reporters, because "substances from here are not very good".

insidethegames sent four specific questions to the IWF about the historic out-of-competition testing levels, the performance of HUNADO, the Azerbaijan situation in 2013, and the alleged "missing" money.

In response, a statement read: "The IWF is currently translating and reviewing today's TV show and is particularly concerned by the revelations concerning what may have been the systematic doping of junior athletes.

"Amid a number of apparent falsehoods, unsubstantiated allegations and disproven rumours dating back to as far as 2008, there does seem to be some fresh information included in the programme which may be of use to the IWF's efforts to promote clean weightlifting and protect clean sport.

"The IWF will move very quickly to investigate the issues raised in the show as quickly as possible, and has requested the transcripts and research materials.

"The IWF takes these allegations very seriously and, where appropriate, will consider independent third-party assistance in investigating these matters."