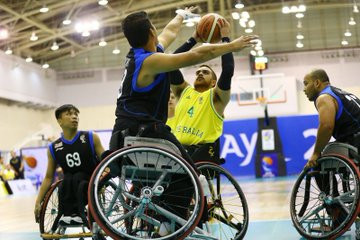 Australia secured their place in both the men's and women's finals, as action continued today at the International Wheelchair Basketball Federation Asia Oceania Championships in Pattaya.

Awaiting them in the gold-medal match are South Korea, who defeated Japan 69-61 in the other last-four encounter.

Australia booked their spot in the women's final by overcoming Japan 49-37.

It sets up a clash with China after they claimed an 82-30 win over hosts Thailand.

Elsewhere in the men's event today, China beat Malaysia 83-34 and Thailand defeated Saudi Arabia 76-29 to advance through to the fifth-place play-off.

The winner of that will secure the fourth and final qualification place for the Tokyo 2020 Paralympic Games, joining Australia, Iran and South Korea, who secured their berths by reaching the semi-finals.

Malaysia and Saudi Arabia will contest the seventh-place playoff.

Today's two other men's matches saw Iraq overcome Afghanistan 73-50 in the 11th-place playoff and India register a 54-34 victory over Indonesia in the 13th-place playoff.

The event, which concludes tomorrow, is being hosted by the Thailand Wheelchair Basketball Association.