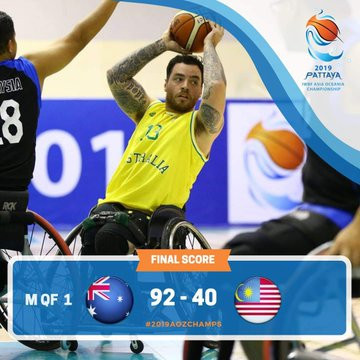 Australia, Iran and South Korea all secured their places in the men's wheelchair basketball tournament at next year's Paralympic Games in Tokyo after, reaching the semi-finals of the Asia Oceania Championships in Pattaya.

The first team to advance were Australia, who beat Malaysia 92-40 in the last eight of the event at the Thai city's Eastern National Sports Centre.

Awaiting them in the last four are Iran, who defeated China 84-51 to clinch their Tokyo 2020 ticket.

South Korea, meanwhile, booked their Paralympic spot with a 67-41 win over hosts Thailand.

Their semi-final opponents will be Japan, who overcame Saudi Arabia 78-21.

With Japan already qualified for Tokyo 2020 as the home nation, the fourth and final Paralympic berth up for grabs will go to the fifth-place finisher.

Beaten quarter-finalists China, Malaysia, Saudi Arabia and Thailand will battle it out in the fifth-to-eighth-place playoffs.

Prior to tomorrow's semi-finals, Malaysia face China and Saudi Arabia meet Thailand for the right to contest the fifth-place playoff.

China 🇨🇳 claimed the top spot in the #2019AOZChamps Div 1 pool stages with a win over Australia 🇦🇺. Wins for Iran 🇮🇷 & Afghanistan 🇦🇫 mean they will play-off for 5th/6th .

Today's one other men's match saw Chinese Taipei beat the Philippines 53-48 in the ninth-place playoff.

China made it a perfect four wins out of four in Division A of the women's competition, defeating Australia 55-24.

It means they will play hosts Thailand, the winners of Division B, in the semi-finals tomorrow.

The other last-four encounter pits Australia against Japan, the second- and third-place finishers, respectively, in Division A.

Australia, China and Thailand have claimed the three Tokyo 2020 berths on offer.

In the first round of the fifth-to-eighth-place playoffs, Iran overcame India 48-19 and Afghanistan beat Cambodia 38-28.

Both matches are due to take place tomorrow.