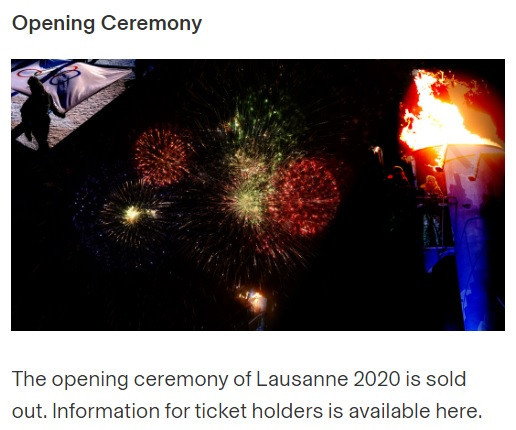 Organisers put tickets for the Ceremony at the newly built Vaudoise Arena, which has a capacity of 8,000, on sale on November 21.

Logan said organisers were satisfied with their pricing structure, claiming tickets were not too expensive and the costs were in line with other major events held in the Olympic capital.

Seats for indoor sporting events in Lausanne, including ice hockey, figure skating and short track, are free to all spectators.

The Lausanne 2020 chief claimed 70,000 local students had registered for free tickets so far.

Free access will be given to all fans for outdoor sports at venues including Les Tuffes in France and St Moritz.

The winning song was chosen following a competition launched in collaboration with the Haute Ecole de Musique Vaud Valais Fribourg.

It features four young singers from the country's four linguistic regions, with an English chorus.

"The official song of the Games is a melody that will play in our minds for weeks, months and years, notes that remind us of the shared moments of friendship, of the Olympic adventure," Lausanne 2020 President Virginie Faivre said.

The Winter Youth Olympics begin with the Opening Ceremony on January 9 and conclude on January 22.

Around 1,880 athletes from 70 countries are expected to compete.