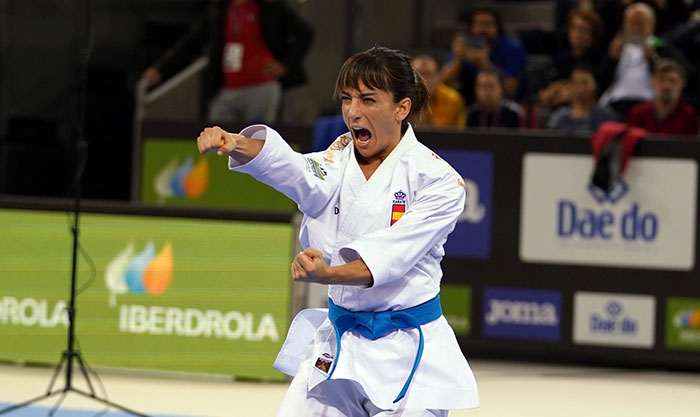 Hosts Spain celebrated double kata gold on a day of finals at the Karate 1-Premier League in Madrid.

Sandra Sanchez celebrated her fourth victory of the Karate 1-Premier League season at the Pabellón Multiusos Madrid Arena, as she was ensured of the Grand Winner title.

The home favourite edged rival Kiyou Shimizu of Japan, the pair competing in the gold medal contest for the sixth time this season.

Sanchez achieved a score of 27 points, with Shimizu forced to settle for second place on 26.28.

"I am very happy because the Grand Winner award recognises the efficiency and the hard work throughout the season," said Sanchez after winning the prize for the second successive season.

"Winning the title at home, in front of so many friends supporting me makes it even more special."

Her achievement was replicated by Damian Quintero in the men’s event as he ended a run of five silver medals in finals.

Quintero scored 26.12 points to stretch his winning record over Ali Sofuoğlu to four consecutive finals, with the Turkish athlete ending second on 25.92.

Kazakhstan enjoyed a strong day in the kumite competitions as the Karate 1-Premier League event concluded.

Darkhan Assadilov won his fifth title of the season in the men’s under-60 kilogram category, with the Grand Winner awarded victory in the final due to his team-mate Kaisar Alpysbay’s injury.

There was a maiden Premier League title for Yermek Ainazarov in the men’s under-75kg event.

The Kazakhstan competitor was awarded victory by the judges after his contest with France’s Logan Da Costa ended scoreless.

A hat-trick of Kazakhstan golds was sealed by Sofya Berultseva, who beat world champion Eleni Chatziliadou of Greece 1-0 in the women’s over 84kg final.

They overcame Russia’s Nailya Gataullina and Turkey’s Serap Özçelik in their respective finals.