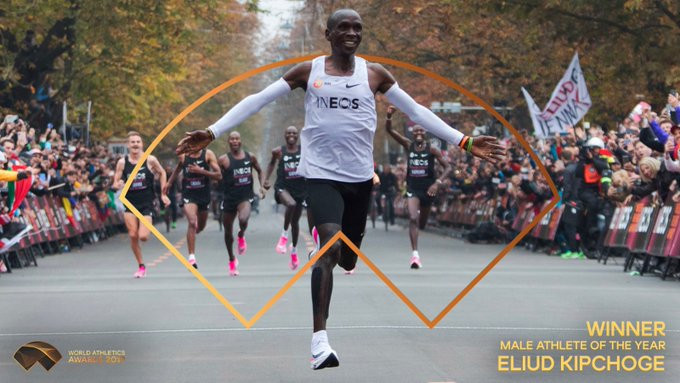 Eliud Kipchoge, the first man to run the marathon in under two hours, and Dalilah Muhammad, who twice broke the world 400 metres hurdles record in a year that saw her become world champion, have been named the respective male and female athletes of the year at the World Athletics Awards here.

Kipchoge, who also won this award in 2018, was honoured at the end of a year in which he had retained his London Marathon title and then become the first runner to better two hours for the marathon in the specially staged INEOS 1:59 Challenge in Vienna.

While Kipchoge’s effort was not allowable for record purposes - given that he had no opposition and was given regular shifts of pacers in formations calculated to reduce his wind resistance to the lowest possible levels - it was an extraordinary demonstration of human endeavour and endurance which ended with him crossing the line in one hour 59min and 40sec.

"I hope I inspired a younger generation," Kipchoge, who was unable to attend the ceremony, told the audience via live link.

He paid tribute to the team that had allowed him to earn his achievement, adding: "It has been massively and mutually successful."

Muhammad broke the world record for the first time at the United States Trials - despite having fallen and concussed herself in training 10 days earlier - with a time of 52.20sec, improving Yuliya Pechonkina’s 16-year-old mark of 52.34.

"It’s been a tough year but it has just come home excellently,” she said.

"I never ever imagined coming home to this.”

Father Colm O’Connell received the Coaching Achievement award, which honoured the 43 years he had spent in Kenya training thousands of young male and female athletes.

After setting two world records in 2019 and winning the world 400m hurdles title, @DalilahMuhammad is crowned Female Athlete of the Year?#AthleticsAwards pic.twitter.com/xse3keHruz

The other four shortlisted male athletes were Norway’s Karsten Warholm, who retained his world 400m hurdles title and ran the second fastest time ever, 46.92, Joshua Cheptegei of Uganda, who won the world cross country title and 10,000m title, Sam Kendricks of the United States, who retained his world pole vault title and cleared 6.06m, and his compatriot Noah Lyles, who won the world 200m title and ran 19.50sec, the fourth fastest time in history.

On the women’s side the four other finalists were Yulimar Rojas of Venezuela, who successfully defended her world triple jump title and set a mark of 15.41m, the second furthest ever, Brigid Kosgei of Kenya, who set a world marathon record of 2hr 14min 04sec in Chicago, Sifan Hassan of the Netherlands, who set a world mile record and won world 1500 and 10,000m titles, and Shelly-Ann Fraser-Pryce, who won the world 100m title in 10.71.

The Male Rising Star Award for under-20 athletes went to Selemon Barega of Ethiopia, who won world 5,000m silver in Doha.

"Last year I was in the top five for this award and it encouraged me to win the award last year," said the Ethiopian teenager.

"I'd like to thank all the supporters in Doha, they pushed me to the silver medal."

The female award went to Yaroslava Mahuchikh, the Ukrainian who earned world high jump silver with a world under-20 record of 2.04m.

"Thank you to everyone who supports me and believes in me," she said.

"I never imagined that I would take the silver medal in Doha."

Mahuchikh twice broke the world under-20 record in the course of an evening when the gold went to defending champion Mariya Lasitskene, who also had a best of 2.04 but won on countback.

Braima Suncar Dabo of Guinea-Bissau won the World Athletics Fair Play award for his unforgettable decision during this year’s world 5,000m final to help a faltering Jonathan Busby to finish the final lap.

This year’s President's Award goes to the late Vikki Orvice. A trailblazing sports journalist and pioneer for women in sport.#AthleticsAwards pic.twitter.com/RxXCsW4uaQ

The President’s Award was given posthumously to Vikki Orvice, the athletics correspondent of British newspaper The Sun, who died earlier this year.

"It was Seb's exploits on the track that inspired Vikki's love of athletics," said her husband, Ian Ridley, in accepting the trophy.

"The London Games gave her the finest moment of her career when Jessica Ennis, Mo Farah and Greg Rutherford won gold.

"She would have been so proud to have been given this award.

"Thank you, World Athletics, and thank you Sebastian Coe."