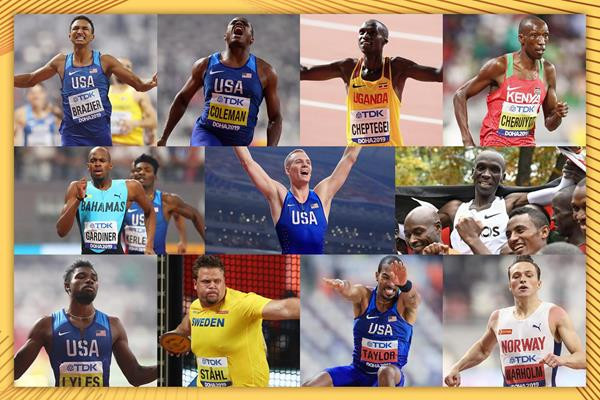 Eliud Kipchoge, who became the first man to run a marathon in under two hours on Saturday (October 12), was among 11 nominees announced today for the Male Athlete of the Year award he won for a first time in 2018.

The International Association of Athletics Federations (IAAF) - soon to become World Athletics - cited the Kenyan’s achievement of running 1 our 59min 40.2sec in an assisted event in Vienna at the weekend, and also his London Marathon win in a course record of 2:02:37.

There is no place for a shot put athlete, despite the monumental contest that took place at this month’s IAAF World Championships, where the United States' Joe Kovacs won with a last effort of 22.91 metres, putting him joint third on the all-time list, with Rio 2016 champion and US compatriot Ryan Crouser one centimetre back, along with New Zealand’s defending champion Tom Walsh.

It will be fascinating to see how Kipchoge, who picked up his 2018 award after taking 78 seconds off the official world marathon record with his Berlin victory in 2:01:39 last September, is perceived by voters ahead of the World Athletics Awards 2019.

The award ceremony is due to take place in Monaco on November 23.

The nominees list includes world 800 metres champion Donavan Brazier, one of the athletes who trained at the Nike Oregon Project that was shut down last week in the wake of the four-year doping suspension imposed on its head coach Alberto Salazar.

The American won his title in Doha in a Championship record of 1min 42.34sec.

The list of nominees has been selected by an international panel of athletics experts, comprising representatives from all six continental areas of the IAAF.

Norway’s Karsten Warholm, who retained his world 400m hurdles title at the end of a season in which he remained undefeated and also clocked the second fastest time recorded, 46.92sec, will surely be a strong contender.

Africa’s hopes will rest not just on the current holder, but his compatriot Timothy Cheruiyot, winner of the IAAF Diamond League and World Championship 1500m titles, and Uganda’s 23-year-old Joshuah Cheptegei, who earned the IAAF World Cross Country title in Aarhus before winning a compellingly competitive world 10,000m final in Doha earlier this month.

Aside from Brazier, the United States has four other contenders.

Sam Kendricks cleared 6.06m, the best of the year, to win the pole vault at the US trials before securing World Championships gold.

Christian Coleman, who only appeared at the IAAF World Championships after a narrow escape from a doping ban on whereabouts grounds, makes the list after making the most of his opportunity and winning the world 100m title in 9.76, the fastest time of the year, before helping the US earn sprint relay gold.

Once again there is a place for Christian Taylor.

In a year when his friend and former training partner Will Claye produced the furthest triple jump of 18.14m, he showed once again that he is a supreme competitor as he beat his buddy to another global gold with a late flourish.

Caribbean hopes are carried by Steven Gardiner of the Bahamas, undefeated all year over 400m, winner of the world title in 43.48.

The list is completed by a second European contender, Sweden’s Daniel Stahl, winner of the world discus title after a season in which he moved to fifth on the all-time list with an effort of 71.86m.

A three-way voting process will determine the finalists.

Voting for the Male World Athlete of the Year is due to close on November 4.

At the conclusion of the voting process, five men and five women finalists will be announced by the IAAF.

The female nominees are due to be announced tomorrow.