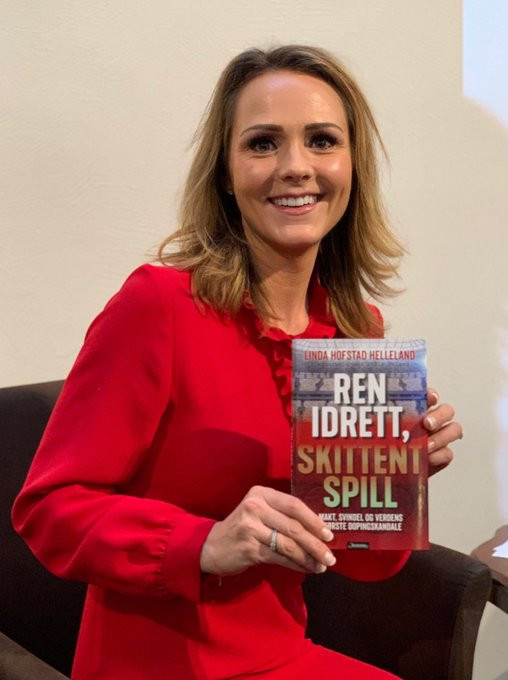 Outgoing World Anti-Doping Agency (WADA) vice-president Linda Helleland has claimed she was spied on by Norwegian companies acting "on behalf of Russian interests" during the fallout from the state-sponsored doping scandal.

In her new book, Clean Sport, Dirty Games, Helleland said the companies had been monitoring her and her family following the decision to suspend Russia.

The former government minister, an outspoken critic of WADA and what she feels was a weak response to the Russian scandal, recalls a meeting with the Norwegian secret service (PST) in June 2018.

"Two people from PST, a man and a woman with grave looks on their faces, came to the Grand Hotel," she writes.

"We sat on a rococo sofa in a lounge on the second floor; me with my hands on my lap, leaning forward while looking at them questioningly.

"The PST people got straight to the point.

"I was told that several Norwegian companies were monitoring me and family on behalf of Russian interests.

"I knew that foreign interests requested information about government ministers - and as WADA vice-president I was extra vulnerable - but that Norwegian companies were involved in this kind of espionage, was quite frightening.

"My thoughts span in my head like a flock of startled birds, I wondered who on earth it could be, and who I had spoken to recently.

"Meetings, emails and messages raced through my head.

"I knew many companies that worked closely with politicians.

"I pondered over what I had said to to whom, and what the Russians wanted to know."

Helleland was one of only two officials to vote against the Russian Anti-Doping Agency (RUSADA) being reinstated at a fractious Executive Committee meeting in the Seychelles last September.

Russia could be banned again following allegations it tampered with data handed over to WADA in January.

A crucial meeting of the Compliance Review Committee is due to take place tomorrow to discuss a report from experts who have analysed inconsistencies found in the data.

Russia was given time to respond to the claims but reportedly fell short with its answers.

If RUSADA is declared non-compliant, the country's participation at next year's Olympic Games in Tokyo would be in jeopardy.

Helleland became WADA vice-president in November 2016 and has consistently criticised the organisation during her tenure.

She has reserved her strongest condemnation for the International Olympic Committee (IOC), a body which features heavily throughout her book, published this week.

Helleland describes the IOC as an organisation which "primarily consists of old men who choose the members independently of the national associations".

The Norwegian also blasts Agenda 2020, the IOC's self-declared strategic roadmap for the future of the Olympic Movement, as a "nice PowerPoint presentation".