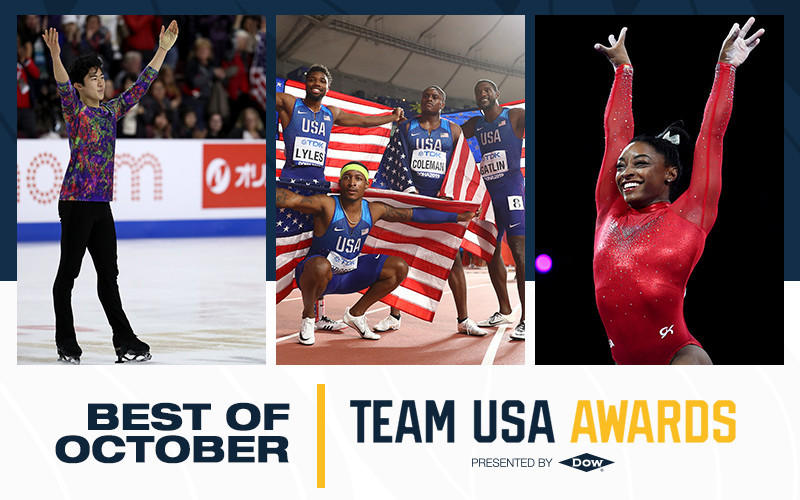 Gymnast Simone Biles, figure skater Nathan Chen and the American men’s 4x100 metres track and field team have been named as the winners of the United States Olympic and Paralympic Committee (USOPC) Best of October awards.

All three are also finalists for the 2019 Team USA Awards, Best of the Year, with the winners set to be announced during the awards show tomorrow at Universal Studios Hollywood in Los Angeles.

Male athlete of the month Chen became only the third US man to win three Skate America titles after scoring 299.09 points in Las Vegas.

The 20-year-old performed three quad jumps, topping his previous record for largest margin of victory and winning by 44 points to earn his seventh consecutive gold medal, dating back to the 2018 World Figure Skating Championships in Milan.

Becoming the most decorated gymnast in World Championships history, female athlete of the month Biles won five gold medals - the most since 1958 - in German city Stuttgart.

During the competition, she completed two skills never performed by a female gymnast in competition - a double-double dismount on beam and a triple-double on floor, which will be named in her honour.

Biles now has 25 career world medals - 19 golds, three silvers and three bronzes - as she works towards her second Olympic Games at Tokyo 2020.

The US men’s 4x100m team of Christian Coleman, Justin Gatlin, Noah Lyles and Mike Rodgers took the gold medal at the International Association of Athletics Federations World Championships in Qatar

They shattered the American record and won the event for the first time since 2007.

With a time of 37.10sec, the quartet were 0.28 seconds quicker than the American record from 2015 and became the second-fastest country of all time behind Jamaica.

Each National Governing Body (NGB) may nominate one female, one male and one team per discipline for the monthly awards.

Votes received from NGB representatives and select members of the media account for 50 per cent of the final tally.