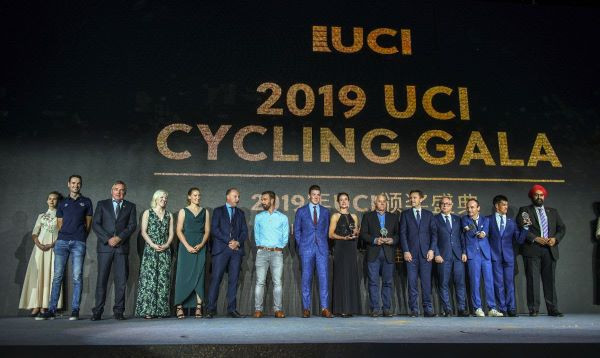 Gold medallists from last month's Road World Championships were among those honoured at the International Cycling Union (UCI) Gala in Guilin.

The worldwide body handed out 17 prizes during the gala, held following the conclusion of the last races on the UCI WorldTour and UCI Women's WorldTours in China.

It included the cyclists who won world titles titles in the road race, time trial and team time trial mixed relay events at the World Championships in Yorkshire.

Denmark's Mads Pedersen clinched the gold medal in the men's road race, despite awful conditions on the streets of the English county.

Annemiek van Vleuten of the Netherlands triumphed in the women's event to secure her third World Championships crown and first in the road race.

The men's time trial honours went to Australian Rohan Dennis, while Chloé Dygert of the United States took victory in the women's competition.

The Netherlands topped the podium in the team time trial mixed relay race.

The UCI also awarded prizes to the best riders and teams on the WorldTour and Women's WorldTour.

The UCI Cycling Gala 2019 is about to start in Guiling, China. 8 categories, 17 athletes and teams awarded for their performance & involvement in making their sport bigger and better. Stay tuned for the prize list! #UCICyclingGala pic.twitter.com/odagXfPgKx

Deceuninck–Quick-Step scooped the best team prize on the men's side and Boels Dolmans earned the women's title.

The top athletes in each of the Para-cycling divisions were also given awards following their performances this season.

Ricardo Ten of Spain, and New Zealand's Emma Foy and Hannah Van Kampen, were given the best cycle and best tandem awards, respectively.

"I would like to warmly congratulate everyone who received an award during this magnificent ceremony," UCI President David Lappartient said.

"All made a major contribution to the success of the past season, and we look forward to seeing them on the roads again in 2020.

"The UCI Cycling Gala acknowledges the achievement of the past season, but also, from this year, a champion who has written some of the best pages of our sport's history.

"This symbolises the nature of road cycling which is as popular as ever and as enthusiastic about its future as it is attached to its heritage."