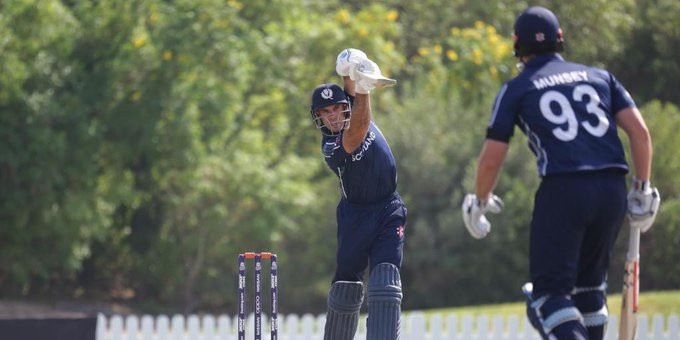 Josh Davey was the hero for Scotland as he took two wickets in the final over at the ICC Academy.

Papua New Guinea, chasing a third straight win, needed nine off the last over but Davey helped ensure they were bowled out five short of their target of 147.

Davey snared Jason Kila for 10 and Norman Vanua for 33 in consecutive deliveries to secure a dramatic triumph for Scotland.

Captain Kyle Coetzer led the way for Scotland as he top-scored with 54 in his team's total of 146-6 from their 20 overs.

Wicketkeeper Matthew Cross finished unbeaten on 40 as Scotland posted a score which would prove insurmountable for their opponents.

UAE win with some style.

Rameez Shahzad leads the way with a half-century as UAE win by eight wickets and more than four overs to spare!#T20WorldCup | #HKvUAE pic.twitter.com/WUtYJ19utu

Papua New Guinea remain top of Group A despite the defeat, while Scotland are third.

Kenya defeated Bermuda by 45 runs in the other match held in the group today.

In Group B, hosts the United Arab Emirates earned a comfortable eight-wicket win over Hong Kong.

Hong Kong were restricted to 116-7 from their 20 overs and the UAE chased down their target with more than four overs to spare.

Rameez Shahzad was the star performer for the home side with 54, while opener Chirag Suri ended on 44 not out.

Ireland are second behind the UAE following their 35-run victory over Oman.