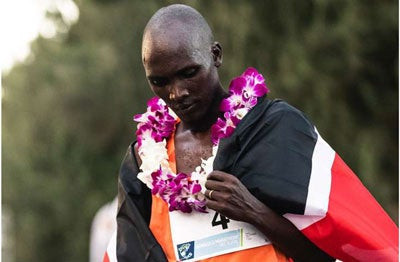 Kenya's doping problems have deepened after another of its leading runners was suspended following a positive test for banned performance-enhancing drugs.

Vincent Kipsegechi Yator has been provisionally suspended by the Athletics Integrity Unit (AIU) after testing positive for testosterone and anabolic steroids prednisone and prenisolone.

He is facing a four-year ban if the case is confirmed.

The 30-year-old Yator set a personal best in July when he finished fourth in the Gold Coast Marathon in a time of 2 hours 9min 59sec.

In April, he had finished seventh in the Vienna City Marathon in 2:10:02.

Last December Yator had come third in the Honolulu Marathon in 2:15:31 in an event notorious for its tough and humid conditions.

Yator had begun his career as a track runner and finished sixth in the 5,000 metres at the 2008 International Association of Athletics Federations (IAAF) World Junior Championships in Bydgoszcz in Poland.

At the 2010 African Championships in Narobi he finished second in the 10,000m.

He becomes the 42nd Kenyan athlete to be currently suspended for doping.

Athletes banned include Jemima Sumgong, winner of Kenya's first Olympic gold medal in the women's marathon when she crossed the line first at Rio 2016.

She tested positive for the blood-booster erythropoietin (EPO).

Between 2004 and August 2018, 138 Kenyan athletes tested positive for performance-enhancing drugs, according to a World Anti-Doping Agency (WADA) report published in September 2018.

Last month, on the eve of the IAAF World Championships here, German broadcaster ZDF showed footage which alleged to show top male and female athletes each being injected with the performance-enhancing substance EPO in pharmacies in the African country.

There were also claims in the programme from a doctor that Kenyan athletes and officials have found a way to sidestep testing methods.

IAAF President Sebastian Coe promised after the programme that the world governing body would investigate the claims.

Yator was not due to represent Kenya here.