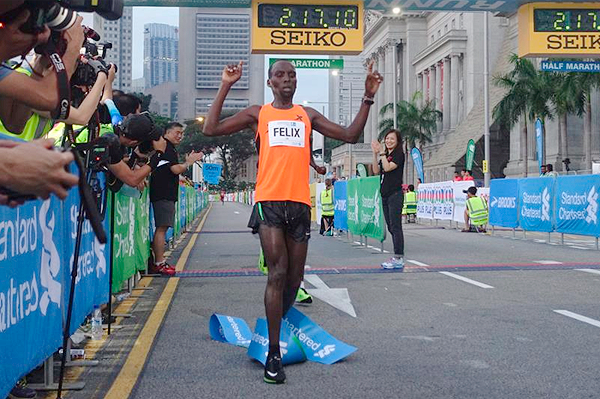 Felix Kirwa has become the latest Kenyan long-distance runner to receive a ban after failing a drugs test.

The Athletics Integrity Unit (AIU) has suspended the 23-year-old from competition for nine months after Strychnine - a banned stimulant commonly used as rat poison - was found when Kirwa was tested following the 2018 Singapore Marathon on December 9, in which he finished as the runner-up.

Kirwa has been disqualified and stripped of his second-place finish.

His ban has been reduced from the maximum of two years, however, as the AIU said it is satisfied Kirwa used the herbal medicine products for therapeutic reasons.

Kirwa is the sister of 2016 Olympic marathon silver medallist Eunice Kirwa, who now competes for Bahrain and is currently facing a four-year ban after testing positive for erythropoietin.

The AIU revealed Kirwa had provided them with documents showing his use of herbal medicine products including "Arthritis Care" and"Goodcare Arthplus" to treat arthritis containing Strychnos nuxvomica, which contains strychnine.

Strychnine itself is not listed on either product, and the AIU accepted that Kirwa had taken the stimulant accidentally.

In its ruling, however, the AIU said Kirwa has been banned because "he did not exercise utmost caution to ensure that he did not use a prohibited substance", and violated International Association of Athletics Federations anti-doping rules.

Kirwa, winner of the Singapore Marathon in 2016 and Macau Marathon in 2017 in a personal best of 2 hours 10min 01sec, was initially suspended from competition on February 14 after being informed he had failed his test a few days earlier, and is therefore banned until November 14.

The AIU announced that Kirwa had accepted their punishment and had not requested a B sample, but said the World Anti-Doping Agency and the Anti-Doping Agency of Kenya have a right of appeal to the Court of Arbitration for Sport in Lausanne, Switzerland.

Around 50 Kenyan athletes have been sanctioned for doping violations in the past five years.