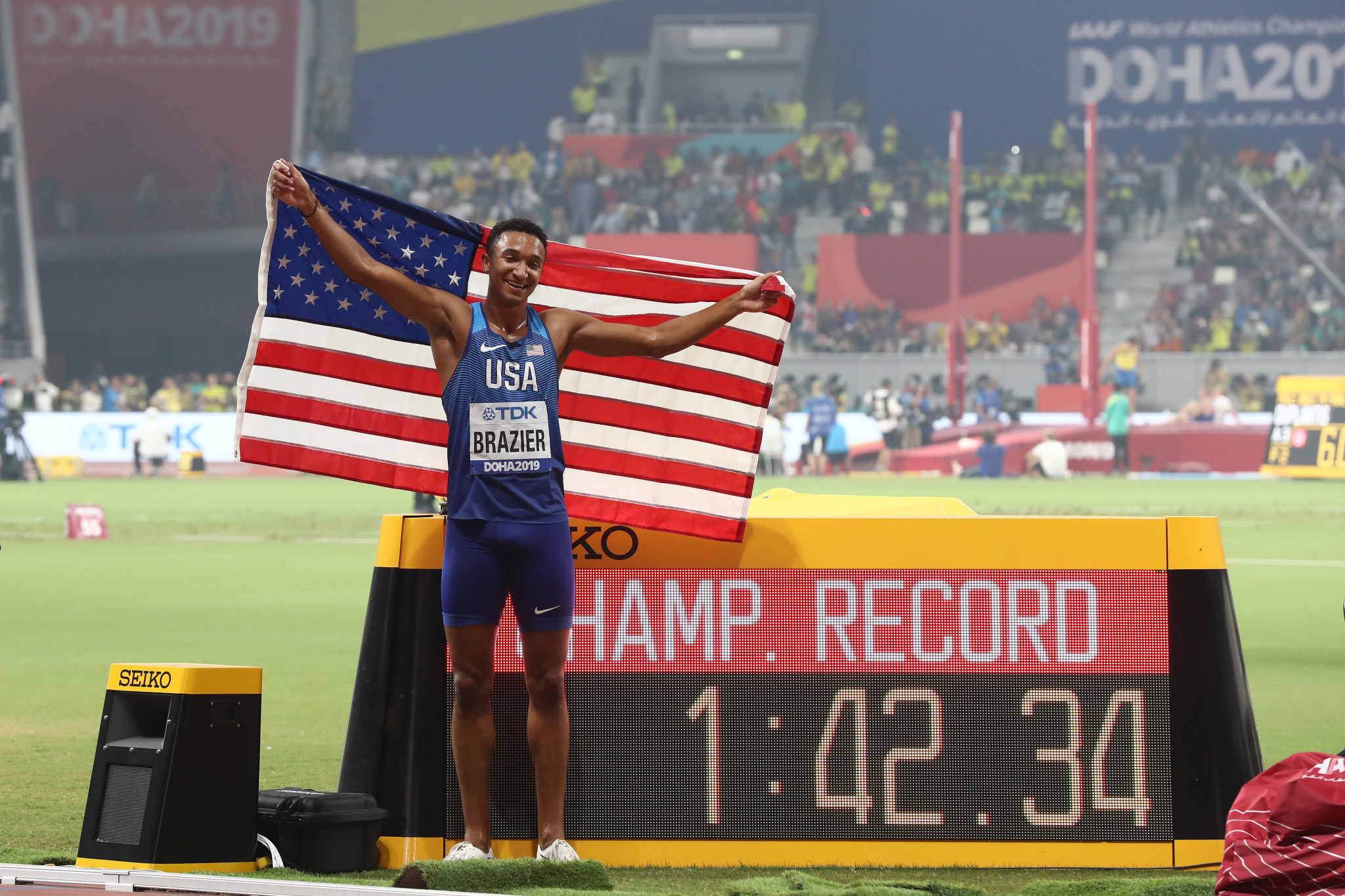 The United States won three out of four golds on day five of the International Association of Athletics Federations (IAAF) World Championships here as Sam Kendricks retained his men's pole vault title in dramatic fashion and Noah Lyles and Donavan Brazier, both 22, earned their first titles at 200 and 800 metres, respectively.

Australia's Kelsey-Lee Barber bucked the US trend with an unexpected gold in the women’s javelin thanks to a final round effort of 66.56 metres.

For Brazier, in the lead-up to the final, there was the additional distraction of the four-year ban for Alberto Salazar, head coach at the Nike Oregon Project, where Brazier is coached by Pete Julian.

It was Brazier’s first major 800m medal, and a time of 1min 42.34sec - breaking the Championship and US records - ensured it would be golden.

He also became the first US 800m runner - male or female - to win the world title.

After the field had reached the bell in 48.96sec, led through by Puerto Rico’s habitual front-runner Wesley Vazquez, Brazier moved decisively to the front halfway down the back straight and maintained his form all the way to the line.

As Brazier drove inexorably for the line, Vazquez finally paid for his sustained enterprise and slipped back to fifth place in a time of 1:44.48.

Amel Tuka, that arch-finisher from Bosnia and Herzegovina accelerated through to claim silver in 1:43.47.

"The plan was always to take it on with 300 metres to go and go from there, no matter what the pace was.

"I have been listening to my coach this entire season.

"He’s been a great coach to me and I didn’t want to let him down in this last race of the season."

Kendricks came through a monumental struggle with Sweden’s 19-year-old European champion Armand Duplantis that matched the previous women’s final, where Sandi Morris of the US and Authorised Neutral Athlete Anzhelika had branched out into a private contest that ended with the latter winning.

Here, gold went to Kendricks on countback after both men had cleared 5.97m at their third attempt before finding 6.02m too much for them.

The American had faced an earlier exit after two failures at 5.87m, but nailed his third attempt.

Duplantis found himself in the same position at the next height up, 5.92m, but also came through to continue a duel during which the two protagonists sat and chatted amiably with each other as if they were at a training session.

Lyles won the world 200m title with efficiency rather than flamboyance in a time of 19.83.

Behind Lyles, Canada’s Rio 2016 silver medallist Andre De Grasse confirmed his return from longstanding hamstring problems by taking another silver in 19.95, ahead of the hugely consistent Alex Quinonez, who became only Ecuador’s second World medallist following the race-walking triumphs of Jefferson Perez.

In the end, Lyles’ decision to concentrate on the longer sprint rather than doubling at the 100m - in which he became Diamond League champion at the end of August - paid off.

"I don’t know how many people come to their first World Championships and get the gold, but I’ve done it," he said.

"I just knew that no matter what position I found myself in I can always find a way to come through.

"And when I crossed the line I just felt relief.

After making her final effort in the javelin, Barber had to watch the three previous leaders take their last throws - but none could overtake her.  As she cavorted in glee and disbelief, China’s Shiying Liu and Huihui Liu had to settle for silver and bronze with respective efforts of 65.88m and 65.49m.

Earlier in the evening Britain’s European 100 and 200m champion Dina Asher-Smith advanced to tomorrow’s women’s 200m final as serious favourite having posted the fastest qualifying time of 22.16, with the next qualifier, Brittany Brown of the United States, clocking 22.46.

Asher-Smith’s chances of adding gold to the silver she took behind Jamaica’s Shelly-Ann Fraser-Pryce in the women’s 100m final on Sunday (September 3) had already risen, given the failure to progress of key rivals such as Marie-Josee Ta Lou of the Ivory Coast, the 2017 world silver medallist, double world champion Dafne Schippers of The Netherlands, due to injury, and Nigeria’s Blessing Okagbare through disqualification.

Tonight, the Rio 2016 100 and 200m champion Elaine Thompson, who has had Achilles' tendon problems this season, scratched from her semi-final.