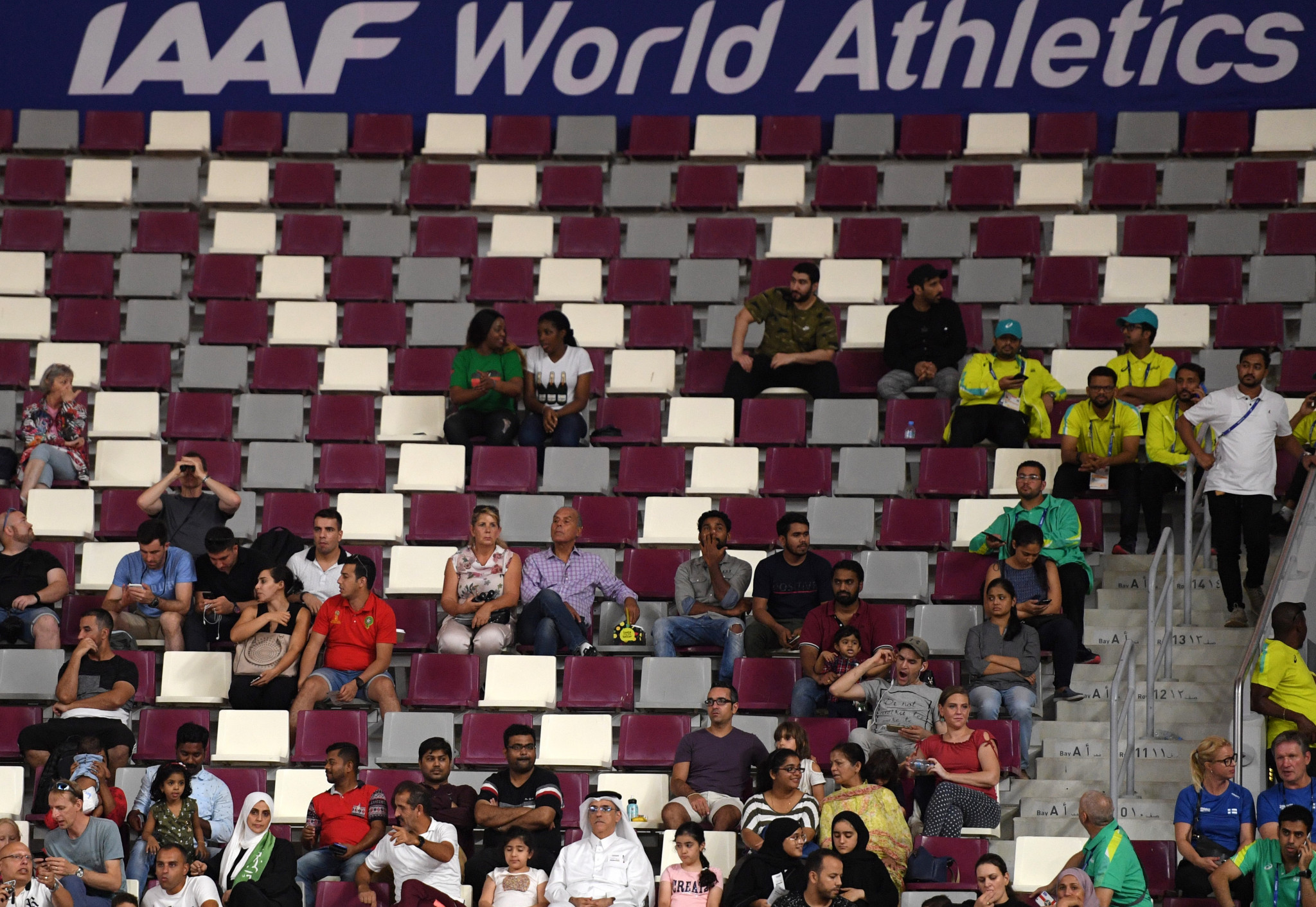 Officials in Qatar today blamed the television schedule and the Saudi Arabia-led blockade for the poor attendances at the International Association of Athletics Federations (IAAF) World Championships here.

The image of the event so far has been the sight of an almost empty Khalifa International Stadium as the world's top athletes compete in the sport's flagship event.

The Stadium normally holds 40,000 but that has been reduced to just 17,000 for these Championships, with most of the top tier of the seating covered up.

It is claimed that 11,800 turned up for the opening session on Friday (September 27) and 11,300 for the following day which featured the men's 100 metres final.

But most of the crowd, largely made of migrant workers, had left by the time Christian Coleman crossed the finishing line to claim the gold medal in a race that started at 10.15pm.

The situation was even worse for last night's women's 100m won by Jamaica's Shelly-Ann Fraser-Pryce.

Qatari officials admit that less than 8,000 turned up with the majority departing long before the showpiece race at 11.20pm.

This is what Khalifa Stadium looks like 5 minutes before the men’s 100-meter World Championship final on a Saturday night.

"The challenge we face with a competition schedule that is geared to support global TV viewership, is that some finals are not starting until the late evening," said a statement from Doha 2019.

"This impacts on the number of spectators remaining until the end of the session.

"We know it is a balance and we are pleased global viewers can tune in to watch the live action from Doha."

Expatriate workers make up 88 per cent of the population in Qatar and many are from countries whose interest is not in the sprints, normally the blue riband event of these Championships.

“The pattern of the attendance so far follows the interests of the local community, with middle and long distance races pulling in the biggest crowds, rather than traditional sprint events, and we would like to thank all the fans that have supported these athletes," Doha 2019 said.

Doha 2019 claimed it is "confident that our renewed efforts will encourage the local community to come and witness the stunning performance of the world’s best athletes".

Making it appear even worse is that this event is being held two years after London staged the Championships, when a record 660,000 tickets were sold for the 10-day event.

When they were awarded these Championships in 2014, Qatar had claimed it was confident it would be able to fill the Stadium with supporters flying in from around the Middle East to attend.

Now officials are also blaming the current political situation in the Gulf for the lack of interest in the Championships.

Saudi Arabia, the United Arab Emirates, Bahrain and Egypt are among several countries who have severed diplomatic relations with Qatar and imposed a blockade after they claimed Doha was supporting terrorism.

"Our vision was for a first World Championship in the Middle East," Doha 2019 said.

"An IAAF World Athletics Championships that would welcome the world and connect to new fans.

"Despite facing unique challenges as hosts, in terms of the political blockade, that ambition remains.

"To date we have witnessed over 80 different nationalities in the Stadium, the vast majority enjoying athletics for the first time.

"The athletes competing at Khalifa International Stadium and fans attending have all relished the experience."

With the marathon and race walks being held after midnight to avoid the searing Qatar heat and humidity, but athletes still collapsing as the conditions take their toll, it all adds to the impression of an event that is being held in the wrong location.

It is a theory Doha 2019 defends itself against.

"The controlled temperature conditions on the track have been ideal and fitting for world-class performances and will remain so," organisers said.

"Whether it is understanding athlete performances in endurance events or stadium design, this Championship is benefitting world sport and important progress is being made.”

One person seemingly not bothered by the lack of people in the Stadium last night was Fraser-Pryce, winner of her fourth IAAF World Championships 100m title, 10 years after winning her first in front of a crowd of 40,000.

This time she was just happy her two-year-old son Zyon and husband Jason were there.

"Doha got the right to hold the event," Fraser-Pryce said.

"You have to give and take.

"There might not have been many people in the Stadium but the two most important people to me were there."