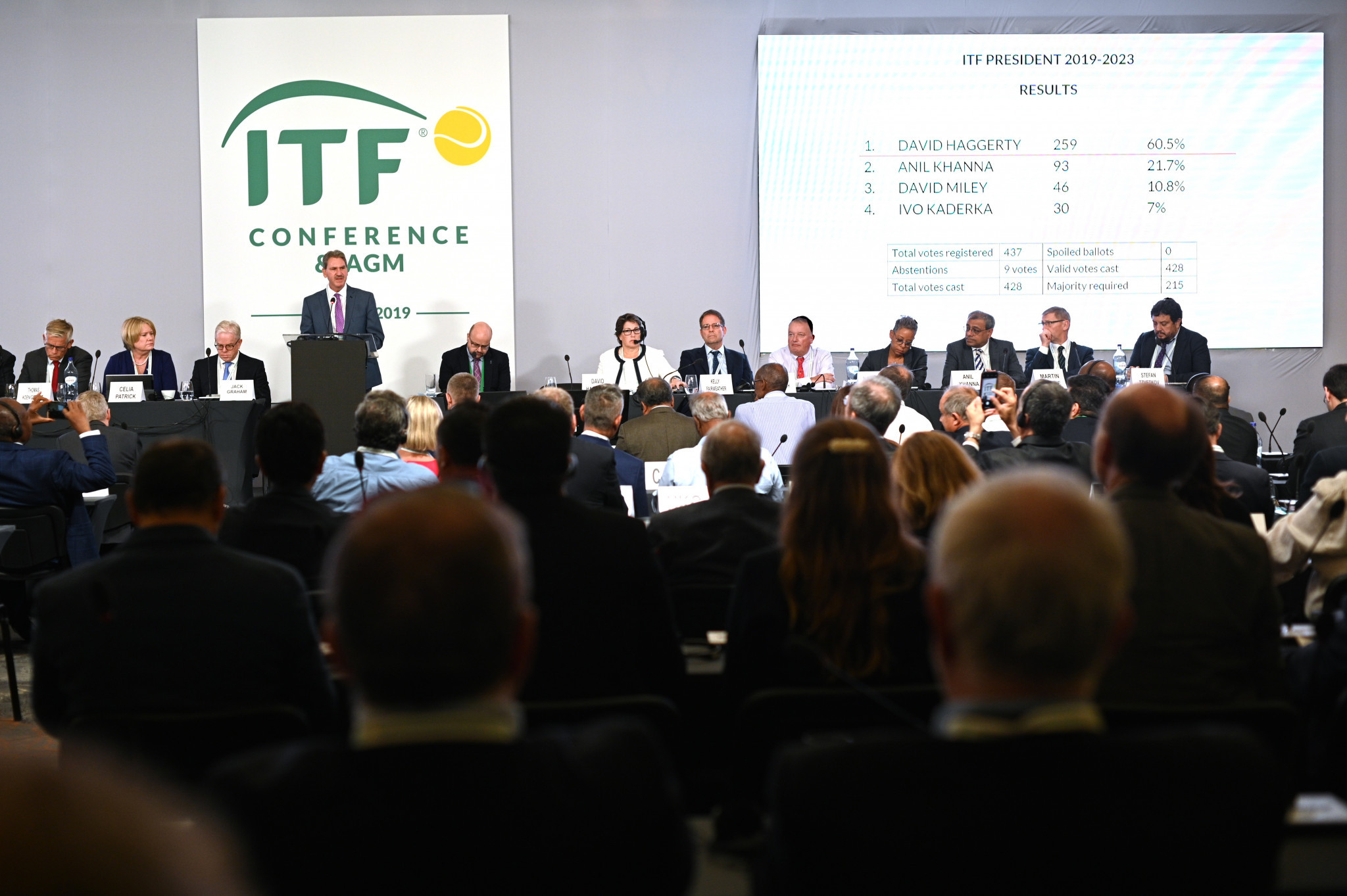 David Haggerty believes his re-election as International Tennis Federation (ITF) President serves as a reconfirmation of changes made by the governing body during his first term.

The American yesterday cruised to a first-round victory in the ITF Presidential election, which took place during their Annual General Meeting.

Haggerty secured a first-round victory after receiving over 60 per cent of the 428 valid votes.

A total of 215 votes were required to win the election, with Haggerty receiving 259 to claim a comfortable victory.

India’s Anil Khanna, who lost out to Haggerty by eight votes in 2015, finished runner-up again with 93 votes.

Haggerty admitted he had expected the result, viewing the increased support from four years ago as evidence the ITF is moving forwards.

The American gave the view that Member Associations wanted stability in the leadership of the ITF as the organisation continues to push through changes.

It is an honour to be re-elected as President of @ITF_Tennis. I am truly grateful for the support of the ITF family and I am looking forward to continuing the great progress we have made together in the exciting years ahead. pic.twitter.com/pZ8zCBWk3G

"I take my hat off to the other candidates who worked very hard to get their position across," he told insidethegames.

"I knew I had quite a bit of support with the transformations and changes we have made, which have helped position the ITF in a stronger role.

"I was very pleased to see the result and it was about what I expected.

"I think it is a reconfirmation of the changes we made last year to the Davis Cup and the support for that, which will all want to see be successful.

"Nations like the changes to funding and distribution, as well as the Fed Cup we announced earlier in the year which was approved.

"The changes we made are very important.

"I think nations wanted to see some stability, as it is easier for the person who wants to make the change to carry out the change.

"As they will then hold me accountable, as they should, against delivering what I promised."

Haggerty had been backed on the eve of the election with the Lawn Tennis Association (LTA) offering their support.

In a conflicting statement, the LTA claimed it was not time for a "radical change in regime", despite saying the organisation was "deeply concerned about the governance of the sport".

The LTA concluded with a vow to hold the ITF President to account.

The LTA had last year voted against the changes made to the Davis Cup by the ITF spearheaded by Haggerty.

Haggerty thanked the LTA for their backing in the election and claimed he welcomed being held accountable.

"Being held accountable is something I have lived with during my life and in business, whether that is sales of rackets and equipment or being on the boards of companies," Haggerty, who previously served President and chief executive of Head USA, said.

"I have no problem with that and I was very appreciative of the LTA’s support.

"I have no problem with the LTA and all the nations holding me accountable for delivering the very best we can."

A key aspect of the ITF Presidential election campaign had been pledges by candidates to boost the relationship between the ITF and the professional tours, the Association of Tennis Professionals (ATP) and Women’s Tennis Association (WTA).

Haggerty revealed he hoped to have conversations with the ATP to collaborate on the future of the sport.

It comes with the launch of the ATP Cup in January, viewed as a rival to the ITF’s Davis Cup.

Haggerty expects talks to be held with the ATP after the organisation determines its own leadership, with chairman and President Chris Kermode set to leave the organisation at the end of the year.

"The ATP are going through the definition of their leadership as well.

"I think when that is defined, we will be able to continue the conversations we have had, and we do.

"I have conversations with the Board members there now.

"I think what we need to do is deliver a great Davis Cup, which we will do, and there will be the ATP Cup in January and I am sure they will do the best to deliver that.

"Afterwards is probably the best time to talk to each other about what we are doing, then decided what makes sense for tennis.

"We want to be open, collaborative and make sure we do the best we can for the sport.

"I think the WTA and the Fed Cup we have been able to have that in April in the calendar and in a flow that makes sense for the players.

"Maybe that is where we will end up with the ATP down the road."