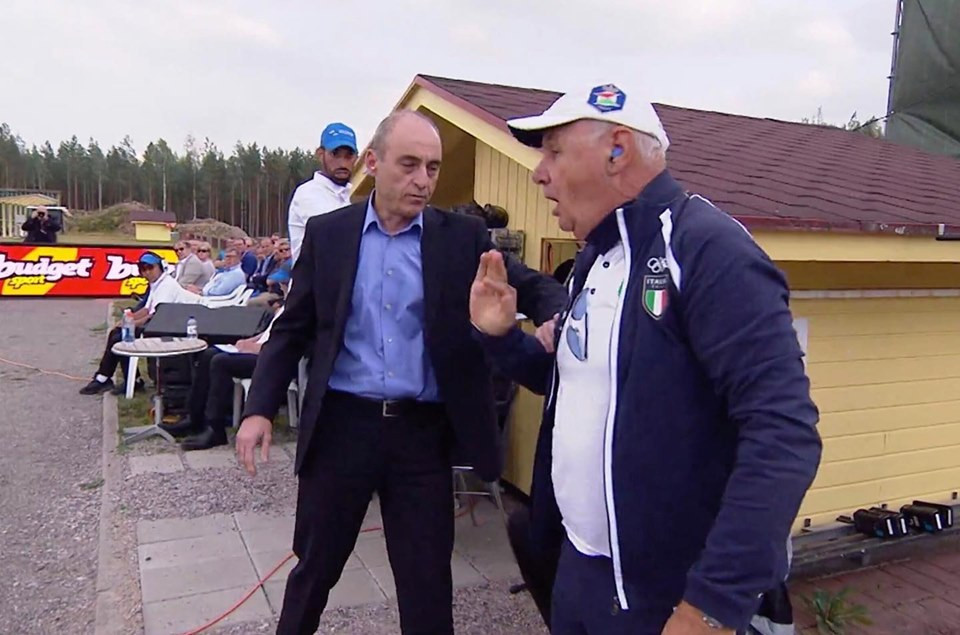 The ISSF made a first picture caption post on Facebook following its World Cup Shotgun event in Lahti, during which Italian coach Albano Pera became embroiled in an argument with ISSF general secretary Alexander Ratner.

Pera took umbrage at a decision in the final of the men’s trap and was apparently asked to leave the field of play by Ratner.

In the social media post, the Italian is pictured remonstrating with Ratner, with the caption competition options appearing to mock Pera, prompting accusations of a lack of respect towards the 1996 Olympic double trap silver medallist from the worldwide body.

Among those to hit out at the ISSF were IOC member and London 2012 skeet shooting bronze medallist Danka Barteková from Slovakia.

Barteková, chair of the IOC Coordination Commission for the 2020 Winter Youth Olympic Games in Lausanne, responded: "With all the respect to ISSF I believe there should be some respect to Mr Albano Pera, who’s been one of the most successful coaches and personalities in our sport.

"I don’t think this is appropriate way to have #funofshootingsport."

ISSF referee and coach Dave Jones added: "It is hard to believe that common sense has not prevailed.

"With respect to those in the ISSF who actually are trying to further the good standing of the sport, this post should have been deleted hours ago.

"Had an athlete, coach or referee posted it in a manner directed towards an official of the ISSF, would it have been allowed without an action taken towards them?

"If the answer is no it should not still be here."

The Italian Skeet Shooting Federation responded to the ISSF post with a letter they published among the comments, indicating that nobody was laughing about the picture caption.

The letter, which claims the decision Pera had become agitated about affected the outcome of the final, asked three key questions of the ISSF.

These were: on what grounds the secretary general of ISSF was directly engaging with coaches and referees on the field of play during the review process of the VAR system, a potential conflict of interest of Vladimir Lisin being ISSF President as well as being President of the European Shooting Confederation and Russian Shooting Union, and who was in charge of the ISSF's communications.

It comes amid a Russian-Italian feud within the ISSF after Lisin beat Luciano Rossi by four votes in last year's election - a result the Italian is challenging at the Court of Arbitration for Sport.

Rossi, President of the Italian Skeet Shooting Federation, told insidethegames his organisation was awaiting a response to its questions and hit out at the ISSF for a lack of respect.

"The position of the Italian federation is very clear," he said.

"The post is a provocation of our coach and this is not a way to show respect.

"There is a clear disrespect here, not only towards Albano [Pera] but to the whole sport."

He said the ISSF's handling of the situation was "a joke".

Rossi added: "We were surprised to read for the first time this competition on Facebook and it is a humiliation against our national coach.

"It was a mistake and I think many of the coaches and athletes were shocked by the situation.”

In clarifying its position on events in Lahti, an ISSF spokesperson told insidethegames: “During the ISSF World Cup Shotgun in Lahti the ISSF conducted the sequential testing of the video-assisted referee (VAR) system.

"The ISSF leadership in accordance with its functional duties determined by the ISSF constitution controlled how the testing was going on.

"At that time the Italian coach, being unsatisfied with the results of the Italian athletes, tried to put pressure on the referees and jury members and to express his dissatisfaction.

"After the final the secretary general, Alexander Ratner, personally made a remark to him about the inadmissibility of such a behaviour.”

The spokesperson said the ISSF could not reply to all social media posts and claimed the platforms are an effective tool for increasing the sport’s audience.

"The ISSF considered that at this time there is no need in sanctions against the coach but this way of behaviour should get some public coverage," the spokesperson added.

"The light public forum is one of the methods to communicate with the society.

"The number of likes we got is much higher than the number of negative comments from one of the parties concerned."