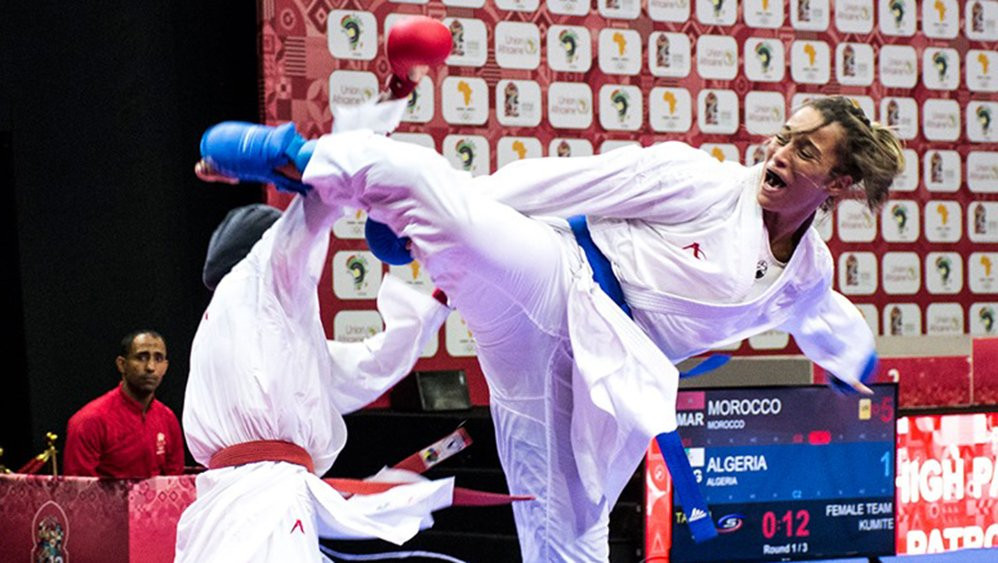 Morocco confirmed its status as the major karate powerhouse in Africa after topping the sport's medal table at the 2019 African Games in Rabat.

The host nation claimed a total of 15 medals, including nine golds, across three days of competition at the Moulay Abdellah Sports Complex.

Sanae Agalmam won the first title for Morocco after prevailing in the women's kata event.

The promising Rabat-native beat Egypt's Sarah Sayed in the final.

There was also victory for Morocco in the men's kata final, with Mohammed El Hanni defeating Egypt's Ahmed Shawky.

The strong performance of home karatekas continued in the kumite categories, with success for Aicha Sayah in the women’s under-50 kilograms ahead of favourite Radwa Sayed of Egypt.

There were also kumite triumphs for Morocco through Abderrahmane Eddaqaq in the men's under-67kg, Nisrine Brouk in the women's under-68kg and Achraf Ouchen, the 2016 world silver medallist, in the men's over-84kg.

Brouk had only one appearance in major international events before the African Games, but saw off favourite Lamya Matoub of Algeria in the semi-finals before upsetting Abdelaziz.

Powerhouses Egypt finished the tournament with two gold medals and in second position on the final medal table.

The second gold medal for the Egyptian delegation was taken by Malek Salama, the UFAK Senior Championships silver medallist, in the men's kumite under-60kg after he shocked Morocco's Abdessalam Ameknassi, a 2018 world bronze medallist, in the final.

Algeria also had reasons to celebrate, with two golds.

The second title for the Algerians came in the men's team kumite event.

Tunisia's Chahnez Jami took the spotlight on the last day of competition, as she added the women's kumite over-68kg crown in the African Games to that in the UFAK Senior Championships, overcoming Egypt's Menna Shaaban Okila.

It was not the only gold medal for Tunisia, with Thameur Slimani winning the men's kumite under-84kg crown to the disappointment of Morocco's Nabil Ech-Chaabi.

Congo, Botswana and Senegal made up the rest of the top eight in the medal standings, while Benin, Burkina Faso, Gabon and Nigeria shared ninth place.