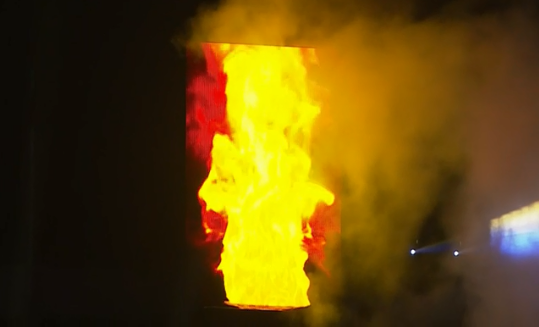 The 2019 African Games have officially begun following the Opening Ceremony in the Moroccan capital of Rabat - and the "lighting" of the flame.

Morocco, who had not participated in an African Games since 1978 after they were banned following a territory dispute over Western Sahara, stepped in as last-minute hosts after Equatorial Guinea pulled out over funding worries.

As a result, a key feature of the Games has been sustainability, with no new venues constructed for the event.

A group of 17 venues will be used in total, with the cities of Casablanca, El Jadida and Khemisset welcoming athletes alongside Rabat.

It also meant a virtual flame was lit at the Opening Ceremony at the Prince Moulay Abdellah Stadium, to ensure no gas or fuel was burned unnecessarily.

The only real flames came from a vibrant fireworks display to end the Ceremony and officially begin the Games which is scheduled to run until August 31.

It signals the start of a competition where more than 7,000 athletes from 54 nations are expected to take part in 26 sports.

Many of those athletes took part in the parade of nations which began the Ceremony, although they did so in front of a half-empty stadium, with large swathes of seats seemingly going unsold in Rabat.

Congo, who hosted the 2015 Games in Brazzaville, entered first, while Morocco were the final country in the parade.

Prince Moulay Hassan of Morocco gave a speech to declare the Games officially open, while Moroccan middle-distance runner Rababe Arafi took the athlete's oath on behalf of the competitors.

The show, which formed the main body of the Opening Ceremony, included a recreation of Rabat's Hassan Tower constructed in the middle of the arena, lit in various styles and with a series of videos during the performances.

Notable moments in the show celebrating Morocco's geography, art and culture included a flock of electronic drones with blue lights flown over the Stadium in the shape of a giant bird, and a parade of giant oranges, celebrating the country's most famous fruit.

The show ended with a celebration of King Mohammed VI of Morocco, who recently marked 20 years as the nation's sovereign, and who also has his 56th birthday in two days time.