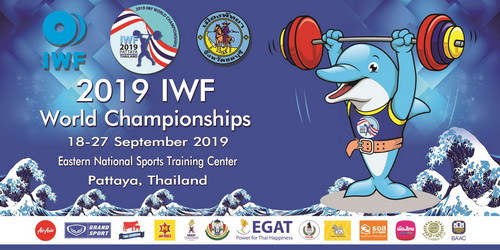 Thailand caused a major surprise by declaring that it wants to compete in the International Weightlifting Federation (IWF) World Championships next month - despite its self-imposed exile for multiple doping offences.

But its hopes were swiftly doused by the IWF, which said "no Thai athletes will be entitled to participate" at the World Championships, due to to be held in Pattaya in Thailand from September 18 until 27.

The Thai Amateur Weightlifting Association (TAWA) suspended itself from international competition in March, but changed its mind this week and said it wanted its athletes to take part in Pattaya and to have a chance to qualify for Tokyo 2020.

A report by the international news agency Agence-France Presse  (AFP) claimed Thailand’s about-turn would be discussed in Pattaya by the IWF Executive Board.

But an announcement by the IWF said, "The IWF Executive Board will not be reviewing TAWA's decision at its meeting in September and therefore TAWA's self-suspension and the suspension of Thai athletes from competing in weightlifting events will remain in place."

Of the nine members of Thailand’s team who tested positive at last year’s IWF World Championships in Ashgabat in Turkmenistan, three had won gold medals and two, Sukanya Srisurat and Sopita Tanasan, were winners at Rio 2016.

News of the violations came out in stages, painting an ever worse picture for the TAWA in December, January, February, when two athletes who had already been suspended came up positive again, and April.

By the time of the final suspension announced on April 4 - by which date Thailand had a total of 12 unresolved doping violations within a year - TAWA had suspended itself from international competition.

On March 7 TAWA made an announcement “in order to keep in existence our high honour and proud dignity”, making three undertakings:

*Thai athletes would not compete internationally "until the situation unfolded";

*They would not take part in the Tokyo 2020 Olympic Games or any of its qualifying competitions - of which the World Championships is the most important one;

* Thailand would carry on hosting the 2019 World Championships, without any of its athletes taking part, "so as to express our accountability for the Thai nation and all Member Federations of the IWF".

TAWA changed its mind and, earlier this week, said it wanted athletes who had not tested positive to compete in Pattaya and have a chance to qualify for the Olympics, though none of the "clean" Thai lifters is well placed in the rankings.

According to AFP, the TAWA President, Intarat Yodbangtoey, believes the athletes who tested positive in Turkmenistan were given a pain relief gel by a former coach.

They were unaware that the gel contained traces of an anabolic steroid.

Yodbangtoey, a vice-president of the IWF, also believed his nation had been singled out for rigorous testing, and said, "Where is the justice?"

The International Olympic Committee (IOC), which put weightlifting "on probation" for nearly two years until May because of past doping problems, will have taken note.

In May the IOC gave weightlifting the all-clear for inclusion at Paris 2024 and beyond, after the IWF adopted a tough new anti-doping policy, a new Olympic qualifying system, and other changes.

Earlier this week, before news of Thailand’s about-turn, Ursula Papandrea, head of the IWF Women’s Commission and a member of the IWF Executive Board, said, "If the Executive Board makes any decisions that can be interpreted as lenient towards doping, they will certainly endanger our Olympic status.

"Although the sport has turned a corner, the leaders are aware they remain under the watchful eye of the IOC."

The IWF Executive Board took a contentious decision in the days before last year’s World Championships, when it went against advice from the governing body’s secretariat and allowed ineligible Turkmenistan lifters to take part.

Like 75 athletes from other nations, those athletes from the host nation had failed to keep their whereabouts information up to date for out-of-competition testers.

They took part as "extras", which did not go down well with the IOC.

Kit McConnell, the IOC’s sport director, said last November, "We understand this was not part of the official competition but having athletes who were not eligible to compete in the competition did cause some concern."