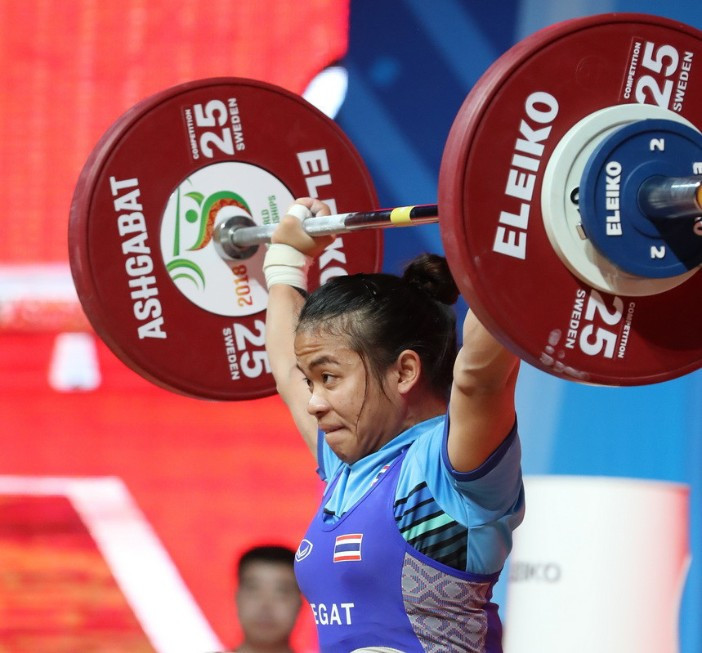 Two more of Thailand’s medallists from the 2018 International Weightlifting Federation (IWF) World Championships have tested positive and are provisionally suspended.

That takes to eight the number of Thai positives in recent weeks, all of whom were in the team who finished second in the medals table behind China in the World Championships last November in Ashgabat in Turkmenistan.

Seven are women, including all three of the nation’s gold medallists in Ashgabat.

Of the six Thai women who won medals in Turkmenistan only one, the 45 kilograms bronze medallist Chirapham Nanthawaong, is still free to compete.

The two latest cases, the 49kg world champion Chayuttra Pramongkhol and 64kg world bronze medallist Rattanawan Wamalun, were announced by the IWF yesterday, which coincidentally is day two of an Olympic qualifying competition being hosted by Thailand in Chiang Mai.

Thailand has not entered any female athletes in that event, the EGAT’s Cup.

The new cases will increase the pressure on Thailand to withdraw as hosts of the 2019 IWF World Championships, due to be held in Pattaya in late September.

Any nation with three or more positives in a calendar year is liable to be suspended for up to four years under anti-doping rules, and Thailand is also facing a ban under Olympic qualifying regulations.

The situation is due to be discussed by the IWF Executive Board next month in Las Vegas, host city for the Youth World Championships.

The IWF did not give any information on where the latest samples were taken, though the six earlier positives were all from secondary tests on samples from Ashgabat, carried out with advanced technology in Cologne.

If those samples were taken at the World Championships it would mean all eight recent positives were from that one competition.

The earlier positives include Olympic champions Sukanya Srisurat, the 55kg winner in Ashgabat who was also suspended for doping in 2011, and Sopita Tanasan, the IWF female weightlifter of the year in 2016 who was among the 2018 nominations.

If the results are confirmed as being from Ashgabat, China's Zhihui Hou is set to be promoted to the gold medal in the 49kg category.

Two Vietnamese lifters have also been provisionally suspended after testing positive, though neither of them competed at the World Championships.

Van Vinh Trihn, who has not competed since finishing second in the men’s 62kg at last year’s Asian Games, was positive for testosterone and Thi Phuong Thahn Nguyen, a 16-year-old female lightweight, was positive for androstane.

The EGAT’s Cup featured an impressive first-day win for India’s Mirabai Chanu and a career-best victory in the 64kg for Huang Ting, the former youth and junior world champion from China, who made a total of 240kg.

The highlight on tomorrow, the final day, will be a return to action for Kianoush Rostami, the Iranian who has not made a total since winning the Olympic gold medal in 85kg at Rio 2016.

Rostami, who has been beset by injuries, competes at the new bodyweight class of 96kg in Chiang Mai and is also expected to lift in the Fajr Cup in Iran in the first week of March.

Like several other recent competitions, the event went ahead with many lifters barred from competing - more than 20 according to one official - because they had not kept their whereabouts information up to date on the anti-doping database.