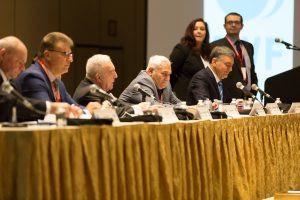 Thailand has agreed to ban itself from weightlifting because of its recent doping record and will miss the Tokyo 2020 Olympic Games, but it will still host the 2019 International Weightlifting Federation (IWF) World Championships.

No Thai athletes will be allowed to compete in the World Championships, due to start in mid-September in Pattaya, nor will they take any further part in the Olympic qualifying programme that runs until the end of April next year.

Two of the eight are 2016 Olympic champions.

Any nation suspended for doping offences is forbidden from hosting an IWF event - Turkey had to withdraw as 2018 European Championships hosts for this reason ­- but the decision to allow Thailand to remain as World Championships hosts, despite having no lifters, was taken by the IWF Executive Board on a majority vote at a meeting in Las Vegas.

Thailand is not suspended by the IWF; it has voluntarily agreed not to compete, so no rule will be broken.

Moving the World Championships at six months notice, or less, would have been a huge logistical and legal challenge, and it is believed a television contract had already been signed.

The Executive Board, meeting in Las Vegas before the start of the IWF Youth World Championships, may also have been swayed by Thailand's willingness to suspend itself even before the doping cases are closed.

The decision is likely to be discussed by the International Olympic Committee (IOC) when it meets on March 26 to 28 to consider weightlifting's progress in cleaning up the sport.

Weightlifting's place on the Olympic Games schedule after Tokyo 2020 is under review because of what Thomas Bach, the IOC President, called a "massive doping problem".

Since Bach made his comments in July 2017, the IWF has drawn up a tough new anti-doping policy and compelled athletes to undergo far more testing in a new Olympic qualifying system.

It has also signed a partnership with the Independent Testing Agency, and it suspended nine nations for a year because of multiple offences at the Beijing 2008 and London 2012 Olympic Games.

Thailand, which finished second behind China in the medals table at Rio 2016 and at last year's IWF World Championships, has been caught out by the crackdown on doping and is the first nation to be excluded from Tokyo 2020 because of doping.

The sport's governing body sees the decision as a good solution to a very tricky situation and Attila Adamfi, director general of the IWF, believes the IOC will see it that way too.

"This is a legally safe solution," he said.

One source in Las Vegas, where the IWF Youth World Championships begin today, said Thailand had accepted that it would eventually be banned for four years, and there has also been talk of a $1 million (£760,000/€890,000) fine.

The IWF denied this, pointing out that there was no length of suspension nor financial penalty, because Thailand had acted voluntarily.

"When the doping cases are closed - and we have no control over how long that process will take, the Independent Member Federaions Sanctions Panel will decide on the appropriate punishment in terms of suspension and fine."

An IWF statement said: "With respect to Thailand’s multiple AAFs (Adverse Analytical Findings) and their potential consequences that seriously damage the integrity of the sport, the Thai Amateur Weightlifting Association (TAWA) undertakes not to participate at any IWF events, including the qualification events and the 2020 Tokyo Olympic Games.

"TAWA still continues to fulfill its obligation and will deliver the organisation of the 2019 IWF World Championships despite the fact that no Thai athletes will be entitled to participate."

If the suspension is eventually confirmed at four years it would be the longest ban for any Member Federation.

Only since the IWF's new anti-doping policy came into effect last year has that length of ban been in the rules; the maximum suspension under the old policy was two years.

Two of the seven women who have been provisionally suspended are Olympic champions, Sukanya Srisurat and Sopita Tanasan, and two have already served two-year suspensions for doping, from 2011 until 2013.

Two of the eight additionally came up positive in out-of-competition tests, and Thailand also has another violation unresolved, from May last year.

In January, after the first six provisional suspensions had been announced, the TAWA said it was "greatly surprised and confused" and was holding an internal investigation.

Nations are liable to suspension under the IWF's anti-doping policy if they have three or more doping violations within a calendar year, and can also be banned for multiple violations within the 18-month Olympic qualifying period.

While Thailand faced a ban under two sets of regulations, no suspension could be imposed until at least three of the cases were closed, which might have been within weeks of the start of the World Championships.

The B-samples of their athletes have not been tested yet.

Because of the problems over timing, the decision to allow Thailand to host, but not compete, has been taken.

It is believed that China, which has already announced its intention to host another Olympic qualifying competition this year, had been sounded out as a possible alternative host.

The 2021 Junior and Youth World Championships have been awarded respectively to Jeddah in Saudi Arabia and Tashkent in Uzbekistan.

The IWF said the junior event "will be of historic significance" as the first World Championship in Saudi Arabia, and the first to feature women.

Looking further ahead, the Executive Board agreed to launch an IWF Strategic Plan 2020-2024, "to strengthen the IWF's position in the global sport environment and the Olympic Movement".

There will be "wide consultation with Member Federations and other members of the weightlifting family to achieve an athlete-centered, sport-focused concept".

The IWF is also undergoing a review of its constitution.

Tamas Aján, the IWF President, said: "It is fitting that just before our Youth World Championships we discussed how we can plan for the future and ensure that we are delivering the very best possible sport for our future stars.

"The Strategic Plan 2020-2024 will integrate feedback from all stakeholders to ensure it truly represents the interests of everyone in weightlifting."