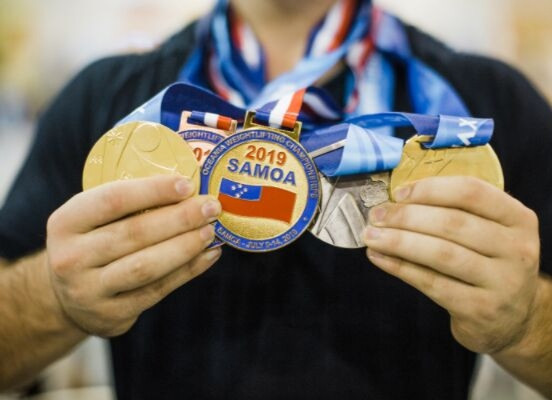 Hubbard was favourite to win the gold medal at last year's Commonwealth Games in the Gold Coast but had to withdraw mid-competition due to an elbow injury, which later required surgery.

Her appearance in the Australian city divided opinion as Hubbard - born as Gavin before transitioning in her 30s - entered a female event.

Hubbard was eligible to compete at Gold Coast 2018 because she passed the International Olympic Committee criteria for transgender athletes after proving her testosterone levels stayed below certain levels in the 12 months leading up to the event.

The 41-year-old entered the women’s over 87kg competition in Samoa fresh from the name suppression being lifted that she had been charged careless driving causing injury after her vehicle fishtailed on a sharp bend near Queenstown in October 2018.

Hubbard pleaded guilty in January to the charge and had to pay a five-figure fee in compensation.

Hubbard's car had collided with another vehicle which was carrying an Australian tourist couple in their 60s.

The driver suffered a spinal injury and had to be hospitalised for 12 days in Dunedin.

He also had to undergo surgery to correct the injury when he returned home.

Hubbard's name had been kept out of the public domain, however, because the judge ruled it could not be revealed until September 30 this year because the "publication of Hubbard's name at that point would be likely to cause extreme hardship'" and damage her bid to qualify for next year's Olympic Games in Tokyo.

The case only came to light yesterday when New Zealand media company Stuff Ltd successfully applied to the High Court in Invercargill to overturn the suppression orders.

Hubbard put the controversy behind her, however, going head-to-head with Samoa's Feagaiga Stowers and Iuniana Sipaia in today’s final, with the former having won Commonwealth Games gold last year in Gold Coast.

Hubbard won the overall title with a lift of 268kg, with Stowers and Sipaia completing the podium on 261kg and 255kg.

There was a cheer from the local crowd when Hubbard failed at a final clean and jerk lift, enabling Sipaia to take the gold medal in the discipline.

Hubbard responded by blowing a kiss and waved to the crowd before departing the competition platform.

Tonga’s Aisake Tuitupou delivered a surprise result in the men’s over 109kg event as he delivered his country’s maiden weightlifting title at the Games by lifting 330kg.

He benefited from the rivalry between Samoa’s Lui Lauititi and New Zealand’s David Liti, the Commonwealth Games champion.

Lauititi edged Liti by one kilogram in the snatch by lifting 178kg, but failed to produce a lift in the clean and jerk.

Liti suffered the same fate after failing with an attempt at 220kg, meaning both lifters had no final totals.

It gave Tuitupou the gold medal and Samoa’s Malachi Faamau the silver, with no bronze medal awarded.

There had already been drama in the men’s 102kg competition where Kiribati’s David Katoatau won gold, despite suffering an injury in his final clean and jerk, leading to him wearing a sling for the medal ceremony.

Katoatau, a fierce campaigner on the issue of climate change, won the overall title here with a total of 338kg.

Petelo Lautusi from Samoa won silver with 310kg, with no bronze medal was awarded as Samoan weightlifter Petunu Opeloge failed to complete a lift.

Sanele Mao delivered a hat-trick of gold medals for the host nation in the men’s 109kg event.

Kari edged the overall event on 354kg, aided by a victory in the snatch by lifting 161kg.

His rival ended one kilogram behind in the total, but won the clean and jerk.