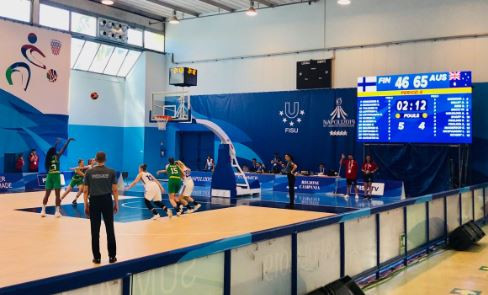 Australia began the defence of their Summer Universiade women's basketball crown with victory against Finland in Cercola.

At PalaCercola, the Australians had too much firepower as they eased to a 68-51 Group D win, while China fought off Canada to win 84-69.

Group A saw wins for Japan, who defeated Ukraine 63-48, and Czech Republic, who edged out Hungary 56-54 at Palasport Del Mauro in Avellino.

Portugal defeated Argentina 64-50 in Group B at PalaBarbuto, while Russia eased to a 59-31 victory against Romania.

As the diving competitions continued at Mostra d’Oltremare, Mexico's Dolores Hernández started her one metres springboard title bid by topping the rankings in today's semi-finals.

The Mexican competed at the 2016 Rio Olympic Games and won three gold medals at the Central American and Caribbean Games.

Canadian Mia Vallée, who has been competing in the International Swimming Federation Diving Grand Prix this season, recorded the third-highest score of 228.60.

The men's 3m springboard saw Chinese diver Bowen Huang qualify in first place for tomorrow's semi-finals with a score of 400.30.

United States' Jordan Pisey Windle prevented a Chinese one-two as he posted 391.55 with Chengming Liu just behind in third on 391.45.

Japan bounced back from yesterday's defeat to Canada with a 17-10 win against France in Pool A of the women's water polo event at Piscina Comunale, Casoria.

In the men's draw, Britain defeated South Korea 17-9 as they recovered from yesterday's crushing 25-1 loss to Russia at Swimming Stadium, Caserta.

Russia made it two wins from two in Pool A of the men's draw with a 12-4 win against France.

The men's qualification for the artistic gymnastics saw Luis Porto of Brazil top the overall rankings after the first of three subdivisions performed at PalaVesuvio Main Hall.

Porto scored 80.350 to sit top of the pile, with Azerbaijan's Ivan Tikhonov second on 80.100 points and Vladyslav Hryko of Ukraine in third on 79.725 points.

Two other subdivisions will be contested tomorrow to complete the men's qualification round.