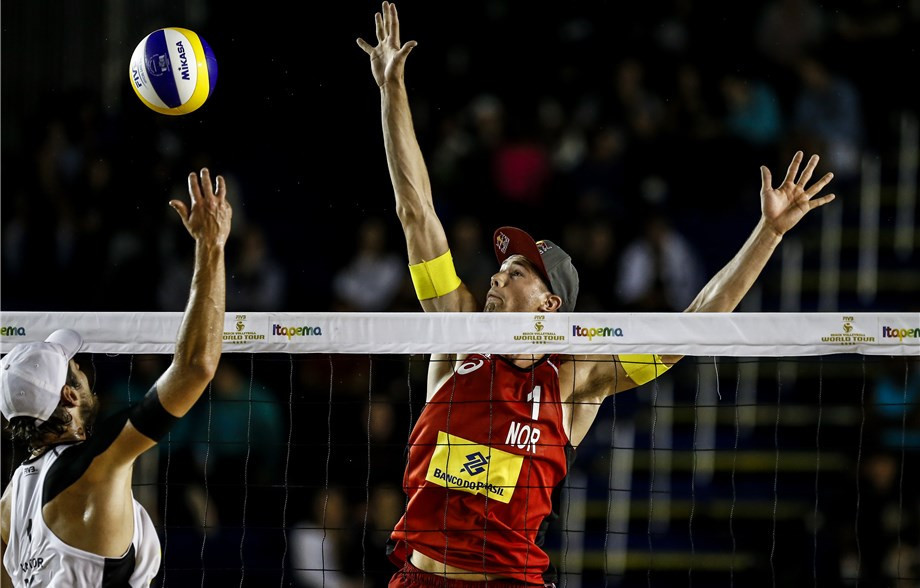 Norway's beach volleyball world ranking leaders Anders Mol and Christian Sørum will have the chance to go one better than the silver they claimed last year after they again reached the final of the Itapema Open in Brazil.

The Scandinavian pair won their first International Volleyball Federation Beach World Tour medal together at this event in 2018, losing at the final hurdle to Brazil's home favourites Evandro Goncalves and Andre Loyol.

They came through both the quarter-finals and the semi-finals today to set-up the opportunity of winning the top prize this time.

In the last four, the Norwegians survived an epic three-set encounter against Poland's Bartosz Losiak and Piotr Kantor, eventually prevailing 21-15, 19-21, 15-12.

"It was a very high-level match," said Sørum.

"They are tough to play against and we had never beaten them before.

"Both teams sided out really well and I think the difference was that in the end we have a few more blocks than they did and we served really well.

"That was a victory to make us really happy."

In the quarter-finals the passage for Mol and Sørum, the reigning World Tour Finals champions, was more straightforward as they beat Americans Theo Brunner and Reid Priddy 21-19, 21-16.

They will now play another Polish pair, Grzegorz Fijalek and Michal Bryl, in the final of the four-star event tomorrow.

This is a repeat of the World Tour Finals gold medal match won by the Norwegians in Hamburg in August, while the Poles also lost to Mol and Sørum in finals in Vienna and Las Vegas.

They are still awaiting their first World Tour gold medal together.

Victory for Mol and Sørum would mean a fifth World Tour gold but Fijalek and Bryl are yet to drop a set in Itapema.

They beat Americans Tri Bourne and Trevor Crabb 21-16, 21-18 in the last eight before seeing off the Netherlands' Christiaan Varenhorst and Steven van de Velde 21-18, 21-15.

In the women's tournament, Canada's Sarah Pavan and Melissa Humana-Paredes and United States duo April Ross and Alix Klineman will renew their rivalries in the gold medal match.

The teams met in a final just two weeks ago in Huntington Beach on the American domestic tour, with Ross and Klineman coming out on top.

Tomorrow's final will be the fifth meeting between the pairs with each prevailing twice so far.

Pavan and Humana-Paredes did things the hard way today as they lost the opening set in both of their encounters.

Ross and Klineman took revenge over Dutch duo Marleen van Iersel and Joy Stubbe, who had beaten them in pool play two days ago.

As well as the finals, both bronze medal matches will be held tomorrow.