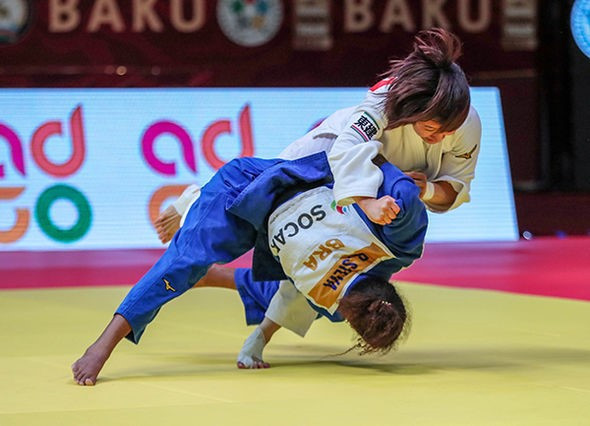 Yoshida, who led the pair's head-to-head series 3-0 before today, was the favourite to win at the Azerbaijani capital’s Heydar Aliyev Sport Hall but Silva pounced with 15 seconds left for a waza-ari score to claim her 12th IJF Grand Slam medal and first gold.

The first bronze medal was awarded to Hungary’s Hedvig Karakas after China’s Tian Hongjie was disqualified for a waki-gatame.

The second was won by France’s Hélène Receveaux with Germany’s Theresa Stoll disqualified after picking up her third shido for passivity.

The 20-year-old fought back tears after throwing Figueroa, the Marrakech Grand Prix winner and two-time IJF Grand Slam champion, with a thunderous o-soto-gari for ippon after just 37 seconds.

There was mixed fortunes for Portugal in the bronze medal matches with Catarina Costa overcoming Brazil’s Gabriela Chibana before Maria Siderot lost to Serbia’s Milica Nikolić.

Today’s other female winner was France’s Amandine Buchard with former world champion Ai Shishime of Japan picking up a knee injury during their under-52kg final and being unable to continue.

Victory saw five-time Grand Prix winner Buchard, the world number one, claim her first IJF Grand Slam crown ahead of her unfortunate opponent, who was also the silver medallist at last year’s World Championships in Baku.

Joining Silva in securing a gold medal for Brazil today was London 2012 Olympic bronze medallist Felipe Kitadai as the veteran ended an IJF competition with a win for the first time in his career.

After earning three IJF Grand Slam silver medals, Kitadai, who was ranked a lowly number 33 at the start of the day, brushed aside Georgia's Temur Nozadze by two scores for the men’s under-60kg title.

First-time finalist Nozadze was stunned by the Brazilian who has given himself a fantastic chance to go on and qualify for the Tokyo 2020 Olympic Games.

The Paris Grand Slam winner, 23, planted the veteran Azeri for ippon to propel himself even higher in the world rankings, which will be updated next week.

It was his third win of the season from four IJF events.

The first bronze medal was won by Mongolia’s Baskhuu Yondonperenlei with Azerbaijan’s Ibrahim Aliyev missing out on a podium place.

Competition in Baku is due to continue tomorrow.