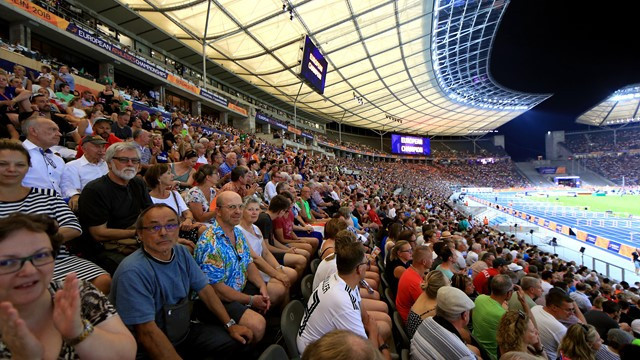 Berlin’s staging of the athletics as part of last year’s inaugural multi-sport European Championships added around €150 million (£128 million/$168 million) to the German economy, as well as generating huge benefits in terms of projecting the city, according to a new report.

The news comes as authorities in Munich have confirmed the city’s application to host the next multi-sport European Championships in 2022 has been officially submitted.

The report analysing the event impact of the Berlin 2018 European Athletics Championships, commissioned by European Athletics, was undertaken by Swiss company Rütter Soceco AG and the University of Applied Sciences in Lucerne.

The economic analysis shows that Berlin 2018 added €144 million (£123 milliion/$162 milliion) in turnover to the German economy and these effects corresponded to creating 1,000 additional full-time jobs in Berlin and more than 300 more elsewhere in Germany.

In addition, a tax income of approximately €11 million (£9.4 mllion/$12.3 milliion) was gained by the public authorities in Germany.

Part of the revenue came from the fact that spectators and visitors had almost 270,000 overnight stays in hotels and other accommodation that were directly related to Berlin 2018.

The economic effects were also felt beyond the German borders.

A total of 1,359 hours of live, replay and highlight television content was shown across Europe from a week before the event until two weeks after the event had ended on August 12.

Berlin 2018 was the co-host of the European Championships with Scottish city Glasgow, which staged the six other sports between August 2 and 12.

In addition to the immediate financial benefits from the championships, there are expected to be significant long-term returns.

The report shows that 98 per cent of visitors to the German capital from outside Germany would recommend a trip to Berlin to their family and friends and spectator satisfaction for Berlin 2018 was rated at 97 per cent: 72 per cent very satisfied, 25 per cent satisfied.

Analysis of the athletes themselves and delegations from Member Federations also gave very high satisfaction ratings, above 95 per cent, for almost every category of the Championships.

Culturally and socially, Berlin 2018 was also assessed as having made a considerable impact.

In the five years leading up to Berlin 2018, youth athletics club memberships and associated registrations increased by 30 per cent.

"Nevertheless, it is gratifying to have the impression we had at European Athletics reinforced and see the numbers in front of our eyes.

"The economic impact, in particular, should encourage existing and future bidders for European Athletics competitions of the benefits that staging our events can bring to host cities.

"However, issues such as the social impact and sustainability are also very important in this report and are a blueprint for how other competitions can bring significant advantages to their surrounding communities..

"A host city for a European Athletics competition does not need to a major European capital such as Berlin, it can be a provincial town; but if the local organisers can deliver an event with efficiency and combine that with creativity and imagination – as Berlin did so well – then the benefits are there for all to see and enjoy."

The Olympic Park in Munich confirming that the German city has submitted the official bid documents for the multi-sport European Championships in 2022. #TheMoment #EC2022 @EuroAthletics https://t.co/CTxxkfwk4g

The day before the report was released, the Olympic Park in Munich tweeted confirmation that the official bid documents for the multi-sport European Championships in 2022 had been submitted.

Councillors in the German city made the decision to press ahead with a bid on March 22, setting up the possibility of a major sporting event returning to the city which staged the 1972 Olympic Games.

According to Süddeutsche Zeitung, Munich City Council heard that €130 million (£112 million/$150 million) in funding will be required to host the event.

The decision to bid comes with the condition that the German Federal Government and the state of Bavaria also contribute a third of the money each.

Venues such as the Olympic Stadium, which staged the 2002 European Athletics Championships, and Allianz Arena could potentially be used.