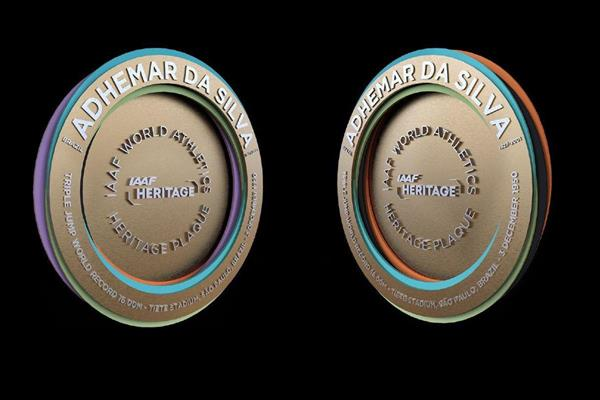 The design of the International Association of Athletics Federations (IAAF) World Athletics Heritage Plaque has been revealed as a further six competitions were recognised by the governing body.

IAAF President Sebastian Coe announced Brazil’s Fernando Silva – a recreational runner from Manaus – the winner of the public design competition which was launched back in December.

His design was claimed to have a main oval which represented the global nature of athletics.

A gold colour ring is asserted to represent excellence, while six bright colours around the oval are viewed as highlighting the IAAF’s six continental areas and core event groups.

The event groups include sprints, hurdles and relays, middle and long distance, combined events, jumping, throwing and out of stadia.

The out of stadia category includes cross-country, mountain, road, trial and ultra running and race walking.

Silva has been awarded a trip for two people to the IAAF World Athletics Championships in Doha.

The IAAF state the plaque design will undergo further work ahead of manufacturing beginning later this year.

“The concept of the World Athletics Heritage Plaque was very well received when we announced the project and the first dozen recipients in December,” Coe said.

“I’m delighted to confirm the design competition attracted a high standard of entries across four continents.

“Now that we have a winner, we have moved an important step towards the first unveilings of plaques around the world in 2020.”

Eighteen recipients of plaques have been confirmed, with Coe having revealed the latest six awards.

The IAAF states the events are two of the oldest national championships in the discipline, having been founded in both 1877 and 1889, respectively.

Italy’s annual Cinque Mulini, an IAAF Cross-Country Permit meeting, was also recognised having attracted many of the world’s best middle and long-distance runners over decades.

The Boston Marathon, first run in 1897, was one of two road races awarded for its history.

The second was the Athens Marathon, which has taken place since 1972.

Dubbed “the authentic”, the event is run on the original course from Marathon to Athens, with its roots stretching to 490BC.

The race was labelled a beacon of excellence and the oldest IAAF Race Walking Challenge meeting.

“We have recognised competitions which rest at the very heart of the history of athletics,” said Coe.

“These six races have over the decades caught the imagination of athletes and fans alike, for whom they are high up in the bucket list of athletics events which must be experienced.

“Some elements like Boston Marathon’s Heartbreak Hill have become part of the folklore of world sport and have set these events apart as truly appropriate Heritage locations.”