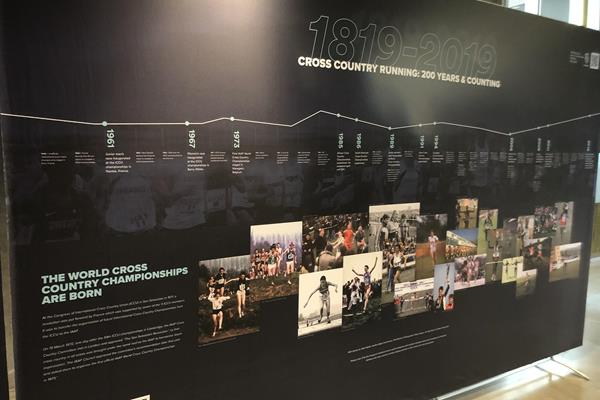 An International Association of Athletics Federations (IAAF) heritage cross-country display has been on show here in the build-up to tomorrow’s World Championships.

The display at DOKK1, Aarhus’ library and culture centre, outlines the 200-year history of cross-country running and features more than 100 items.

Six were loaned from Shrewsbury School in England, a public school which had a “Hare and Hounds” paperchase game.

Runners would follow a trail of paper laid across the Shropshire countryside, which ultimately developed into the discipline of cross-country running.

“I find it amazing that a paperchase running game in the English countryside, invented in 1819 by schoolboys, started a process which 200 years later has become a worldwide running movement.

“Wherever you are in the world, if you run then you owe much to cross country, it’s your history”.

The display also features competition uniforms and spikes, which were either permanently donated to the IAAF heritage collection or were loaned.

Collectively, the runners have won 19 world titles in cross-country.

The Kings Trophy, awarded to the Danish men’s national cross country champion each year, has also been on display.

The IAAF states the 10 inch solid silver goblet is Denmark’s finest and most historic sports trophy.

This year’s Championships has been billed as a return to the sport’s extreme roots, with athletes already noting a challenging course.

Kipketer asserted that the Championships would highlight cross-country as having been the first “extreme sport.”

“The course of year’s world championships in Aarhus returns cross-country running to its original roots as the first extreme sport,” he said.

“The IAAF heritage display traces the sport back to its foundation 200 years ago.

“It’s an incredible story told through text, photos and video.

“Whether you are a recreational runner or a more serious athlete, running which is the world’s most popular pastime began with cross country.”