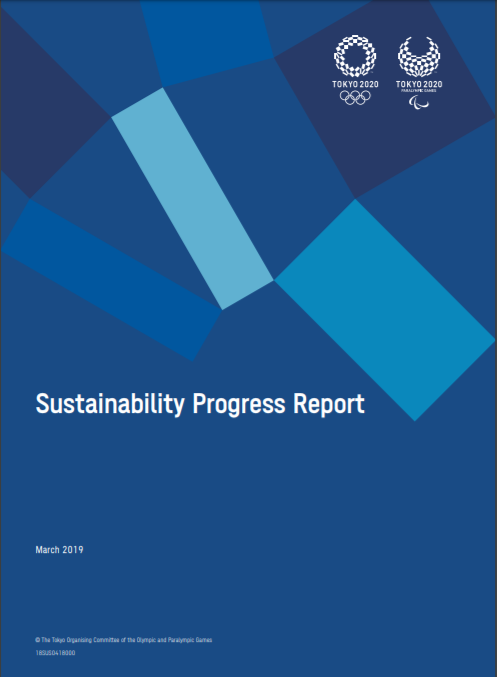 Tokyo 2020 today published a report summarising progress, made mainly during 2018, in the implementation of its sustainability plan.

The Sustainability Progress Report covers areas including procurement and venue and infrastructure construction or renovation, and was prepared in accordance with the Global Reporting Initiative Standards Core Option, a set of international standards governing sustainability reporting.

Tokyo 2020 published the second version of its sustainability plan in June 2018, under the guiding principle "Be better, together - for the planet and the people".

Today’s report details progress achieved thanks to initiatives that were launched in alignment with the United Nations' Sustainable Development Goals in areas such as climate change, resource management, and natural environment and biodiversity.

Other areas include human rights, labour and fair business practices, and involvement, cooperation and communications.

Among the key activities and achievements highlighted to date include the collection of used electronic devices in order to extract the metals they contain and the recycling of these devices to manufacture gold, silver and bronze Olympic and Paralympic medals.

Tokyo 2020 claims this has progressed on target, generating significant public engagement in Japan and internationally.

More than 18,000 collection boxes have been installed at the offices of participating businesses and Games partners, Government departments, and chambers of commerce across the country.

They have also been provided at post offices and at special events hosted by Tokyo 2020.

Tokyo 2020 partner companies are also cooperating in a variety of ways, such as by donating their employees’ used mobile phones.

Approximately 47,488 tons of discarded devices and more than five million used mobile phones had been collected as of October 2018.

The targeted amount of bronze, some 2,700 kilograms, was already extracted from these by June of last year.

Tokyo 2020 also points to how 63 municipalities across Japan have joined Operation BATON (Building Athletes' Village with Timber Of the Nation).

The project aims to construct the Village Plaza using sustainably sourced Japanese timber donated by local authorities across the country, before dismantling it after the Games in order to return the timber for re-use in the communities - for example, as a public bench or part of a school building.

It was only around two months ago, however, that seven environmental Non-Governmental Organisations (NGOs) released a statement saying they are "deeply disappointed" that Tokyo 2020 Olympic organisers were still using timber associated with rainforest destruction and human rights abuses.

The statement was the latest development surrounding an issue that emerged in 2017, when 47 NGOs published an open letter to the International Olympic Committee claiming there was increasing evidence that Tokyo 2020 was using timber supplied by companies associated with illegal logging and human rights abuses.

The Rainforest Action Network, one of the seven environmental NGOs involved in the most recent statement, then produced a report in November 2018 alleging that at least 134,400 sheets of tropical plywood from Malaysian and Indonesian rainforests have been used in the construction of Tokyo 2020 Olympic venues.

Tokyo 2020's Sustainable Sourcing Code warned that organisers must only "use raw materials collected or cultivated in consideration of resource conservation, including the perspective of mitigating deforestation and forest degradation".

Tokyo 2020 organisers have since revised their timber sourcing policy.

Commenting on the release of today’s report, Tokyo 2020 chief executive Toshirō Mutō said: "The involvement of a large number of people will be essential if we are to realise the sustainability of the Games, and it is through the cooperation of various people from Japan and around the world that we have been able to advance a number of specific initiatives to date.

"The Tokyo 2020 medal project has attracted the involvement of many from around the country.

"In fact, the project has been so successful that we will be able to secure all the metal required to produce the medals.

"Some 63 Local Governments have been cooperating with the construction of the Olympic/Paralympic Village Plaza, which will be built with timber loaned from locations throughout Japan that will be returned after the Games have ended.

"This level of involvement illustrates how we are working to recycle resources through nationwide participation.

"With about one year and four months left until the Games, the year 2019 will see Tokyo 2020 undergo a sea change as we transition from the planning phase to the operations phase, which will entail a shift in focus to the respective Games competition venues.

"This year will be extremely important in our efforts to ensure that sustainability is given adequate consideration.

"All members of Tokyo 2020 will work as one to cultivate a deeper awareness of their respective roles and ensure that sustainability is incorporated into all of our activities as we look toward 2020 and beyond."

"As a result of these efforts, we have proposed making the often invisible topic of sustainability more prominent through a collection of meaningful projects.

"The progress outlined in this report is the direct result of the collaborative work of members of the Organising Committee, all others involved with the Games, and the general public.

"The Urban Planning and Sustainability Committee will continue to actively engage in preparations for the Tokyo 2020 Games in order to help deliver a sustainable Games and realise a sustainable society in the years that follow."

Each report will offer specific information with a focus on initiatives from the preparatory phase to the delivery phase of Tokyo 2020.

The 2020 Olympics are scheduled to take place from July 24 to August 9.