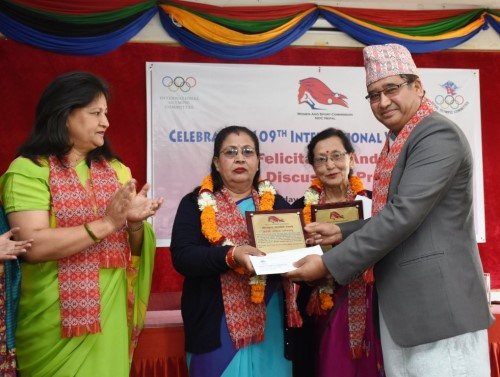 Paneru is the oldest working employee at the Nepal National Sports Council while Manandhar is a badminton player in the Asian nation.

Jeevan Ram Shrestha, the President of the NOC, made the presentations and congratulated both women for their contribution to sport.

Shrestha also used the event to thank Jyoti Rana, President of the Women and Sports Commission at the NOC.

Rana had organised the event to celebrate the two women.

"Even today, in the 21st century, women are still disregarded by society," Shrestha said.

"But these attitudes are changing drastically as women empowerment is also a part of the United Nations Millennium Development Goal 2030."

Last month, the NOC honoured the country's paralgliding team which brought back Nepal's only medals from the 2018 Asian Games in Jakarta and Palembang.