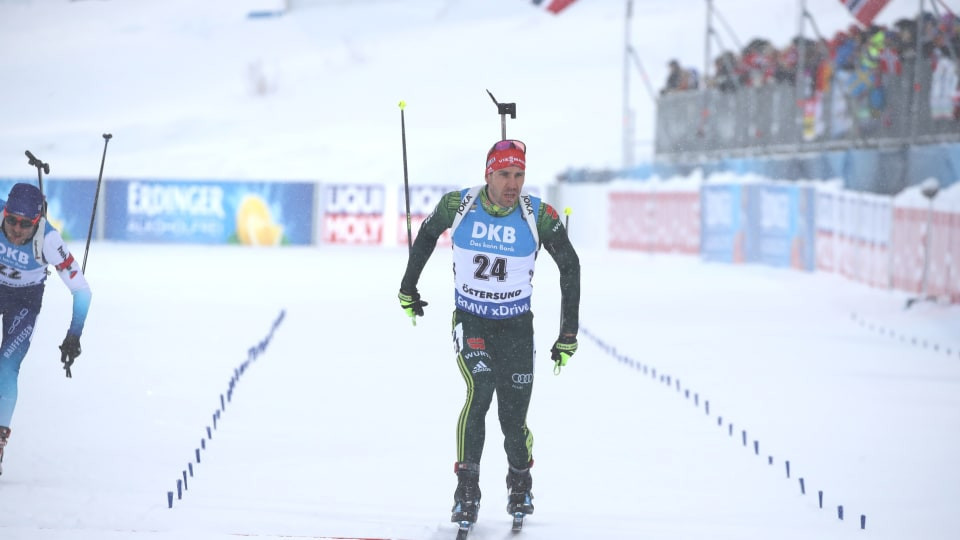 The Pyeongchang 2018 Olympic 10km sprint champion had never achieved a podium finish in the sport's longest and most gruelling event, let alone win it.

A time of 52min 42.4sec put paid to that and secured him his second individual IBU World Championships gold medal, adding to the title he won in the 10km sprint in Russian town Khanty-Mansiysk in 2011.

Bulgaria’s Vladimir Iliev was the runner-up, 1:08.7 back with one penalty, as he claimed his first-ever IBU World Championships medal.

Completing the top three was Norway’s Tarjei Boe, who narrowly fell short of catching Iliev in the last loop.

He finished a further 0.4 seconds behind with one penalty.

The 103-man field lined up for their toughest test of the week with light blowing snow and wind cutting across the shooting range from right to left and vice-versa.

But Peiffer would not be denied by the challenging conditions and a perfect day for the German continued when he closed the final five targets with ease, taking a solid lead.

Sweden's Sebastian Samuelsson was the first of the contenders to finish as he strived for a home win, but Peiffer pulled away to seal a memorable victory.

"It is a big thing for me [to win] because I have never been on the podium in the individual," Peiffer said.

"It is my first time to shoot clean in it.

"I am so happy to have good shooting today.

"I am 31-years-old and have been in many individuals - many times getting to the last shooting and missing a shot."

Iliev continued his near-perfect day with a strong last loop to move in front of Samuelsson.

Tarjei also battled hard as the snow continued to fall, moving just ahead of the Bulgarian with 1,200 meters to go.

He had fallen narrowly behind with 400m remaining, however, and despite pushing hard in the last 100m it was not enough as the Norwegian veteran ended in the bronze medal position for his first individual IBU World Championships podium finish since clinching three in Kontiolahti in Finland in 2015.

Samuelsson had to settle for fourth place, 1:35.7 back with one penalty.

Action in Östersund is due to continue tomorrow with single mixed relay event.