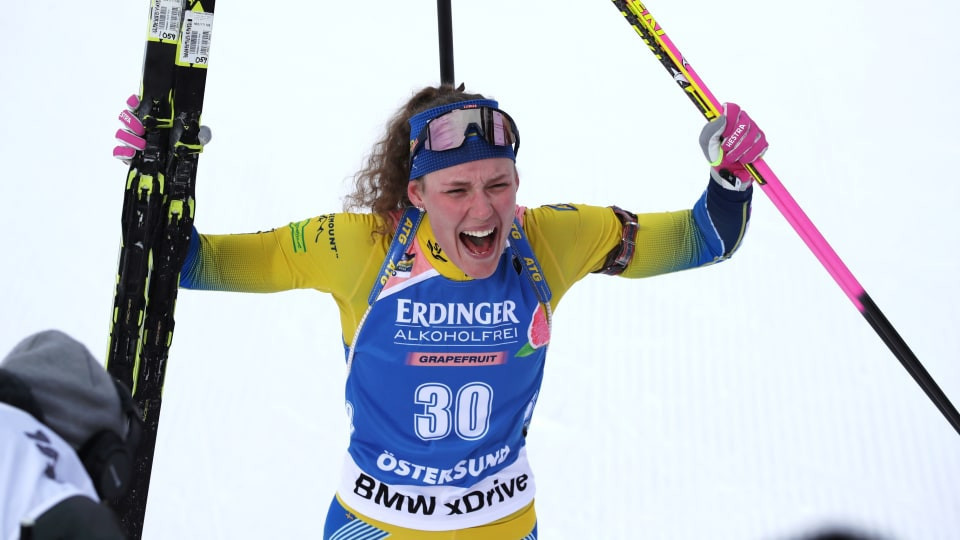 The 23-year-old triumphed in a time of 43min 10.4sec to secure the second major title of her young career.

It follows the Swede's victory in the same event at the Pyeongchang 2018 Winter Olympic Games.

Her silver was her first-ever individual medal at the IBU World Championships.

Late starter Justine Braisaz of France also secured her inaugural individual podium finish at the event, taking the bronze medal with one penalty, 32.5 seconds behind.

Oeberg made it 20-for-20 in the final standing stage, putting her 49 seconds ahead of the field.

She slowed in the last loop, but still led by 41 seconds with 1,500 metres remaining and held on to seal victory.

Vittozzi continued to close the gap to Oeberg, but could not catch the leader.

"This is unbelievable," Oeberg said.

"I am so proud of what I did today.

"I was so focused.

"I was so happy to go complete today.

"Sometimes it was tough on the last loop, but I tried to enjoy it.

"It is unbelievable to make this at home."

Dahlmeier finished fourth with one penalty, 39.5 seconds back.

Fifth place went to Slovakia’s Paulína Fialková, who led for much of the afternoon, with one penalty - 45.5 seconds behind.

Action in Östersund is due to continue tomorrow with the men's 20km individual competition.