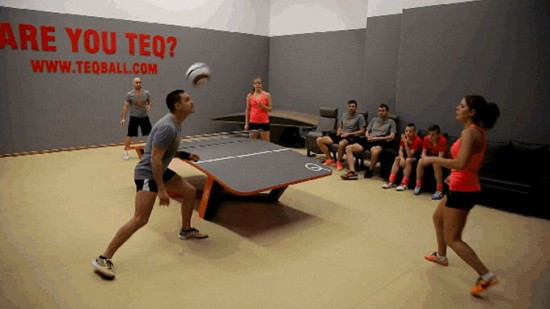 Teqball has received another boost in its effort to be recognised around the world with the news that it is to be a demonstration sport at this year's African Beach Games and African Games.

The decision was taken by the Association of National Olympic Committees of Africa (ANOCA) Executive Board during a meeting in Rabat.

ANOCA will also recommend to its next annual general meeting that teqball, a new football-based sport played on a curved table, is recognised by them and its members.

Since the sport's creation in Hungary’s capital Budapest just five years ago, the governing body claim it has spread to more than 42 countries worldwide.

The sport's signature curved tables are now a common feature at the training grounds of many of the world’s top clubs, including Arsenal, Barcelona, Manchester United and Real Madrid.

"Teqball is a great sport that should be played all over the world," its co-founder Viktor Huszár told insidethegames here.

"We want to create a sustainable international model.

"It is a spectacular sport."

Huszár is here in the Thai capital to attend the 38th Olympic Council of Asia (OCA) General Assembly.

The OCA were the first major international organisation to recognise teqball when they gave it their backing at their General Assembly in Jakarta last August.

Officials from the International Teqball Federation (FITEQ) also plan to travel to Fiji later this month to attend the XXXIX Annual General Assembly of the Oceania National Olympic Committees, where they hope they will recognise them.

Top teqball playes, including from Africa, are set to give demonstrations of their sport at the African Beach Games in Sal Cape Verde, due to take place between June 14 and 23, and the African Games, scheduled to take place in Rabat between August 23 and September 3.

As part of a development plan, FITEQ plan to donate tables and offer training to a number of African countries.

Last month, it was announced that Brazilian footballing icon Ronaldinho had become an ambassador for teqball.